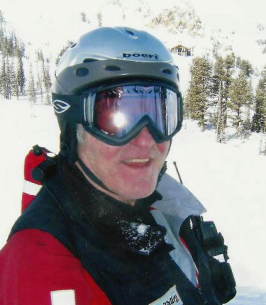 William John Flanagan was born March 1st, 1941 in Fairfield, CT into an Irish-Amerian family. His father had a plumbing business which allowed Bill to begin honing his plumbing skills at a young age. A naturally gifted athlete, he played football in high school and was good enough to continue playing at Boston College.

Bill wasn’t one much for rules and convention and he already thought that he was at least funnier than God, so why be beholden to these strict rules about how to live life?

He was drafted into the army and stationed in Germany where he continued to play football. Germany is where he was also introduced to his biggest love, skiing and once he learned to ski, he never looked back.

Upon his discharge from the army, he returned to CT but felt the pull to explore the country. One might be tempted to ask how does a guy from CT get to another state in the US in the late 60's? He rides his bicycle, of course! And so he rode and rode across the United States, ending up in Denver, CO when his money ran out. You can almost picture him riding into Denver and saying, “Whoooaaa, Nelly, to his two-wheeled companion. From Denver, he moved with friends to Aspen where he joined the ski patrol, a job that would prove to be one of his biggest loves and was the first of many ski resorts he blessed with his presence. He survived being fully buried in an avalanche in 1971 and a broken neck a few years later, of course, while skiing. He even won 3rd place in a Warren Miller Hot Dog Contest. While on his break from skiing to heal his broken neck, he met Carol in Boulder, and the two would eventually get married and move to Ketchum in the early 70’s, never to leave.

He joined the Sun Valley Ski Patrol where he would stay for an incredible 41years. In the meantime he worked for Sun Valley Company as a plumber and worked for them in different roles for 50yrs.

Bill and Carol had two children, Annie and Ned, and they opened their own plumbing business that he and Carol managed together. All the while, he worked each winter on the ski patrol.

Bill lived life like few lived life - to the absolute fullest. He made people laugh with his incredibly quick wit and his love of storytelling; endless storytelling. You knew when Bill entered the room because the energy changed; it became warmer and funnier and just better. His smile could make a blind man smile and his Irish singing over the ski patrol radio on St. Patrick’s Day became something everyone looked forward to hearing.

His extroverted nature belied an incredible intellect and he had one of the biggest vocabularies of anyone around. He had a gift of both gab and of language and spoke like a poet, sometimes leaving us scratching our heads but always leaving us laughing. Bill radiated life and energy and had the most incredible work ethic of anyone around. In spite of his numerous join replacements and injuries, he never missed work if he could help it and he hardly ever complained.

The Valley has lost a beacon of light and a love of life; a joie de vivre, as someone said. Bill knew how to LIVE, REALLY LIVE LIFE and his spirit and energy can never be extinguished.

He is survived by his wife, Carol, daughter, Annie and son, Ned, brother Edward Flanagan and sister, Kay Colangelo and countless nieces and nephews.

We are planning a celebration of his incredible life but may have to delay it due to the Pandemic. Bill would not have wanted anyone to get sick celebrating him, and the only thing that Bill enjoyed more than skiing was a really good party.

Friends are invited to share a memory or photo on Bill’s page at www.woodriverchapel.com

To order memorial trees or send flowers to the family in memory of William John "Bill" Flanagan, please visit our flower store.