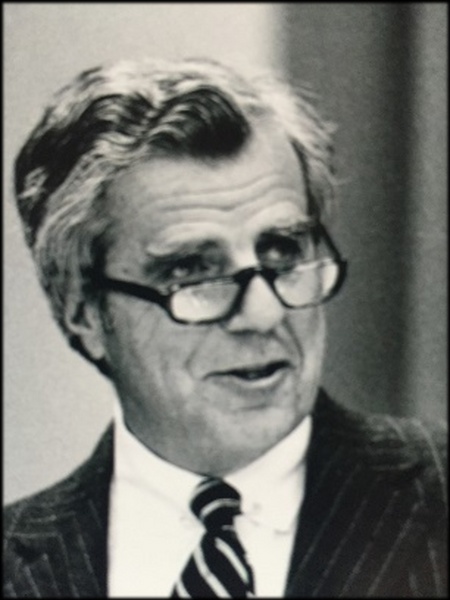 JAMES H. VAUGHN died peacefully at the age of 89 at home in Ketchum, Idaho on June 29th. Born in Cleveland, Ohio on April 7th, 1927, Jim was the only child of Harry Vaughn and Lucille Crane. He grew up in Birmingham, Michigan, attending the Cranbrook Schools. His parents moved to Atherton, California during his high school years beginning a long relationship with the West Coast. After Cranbrook, Jim’s enrollment at Purdue University was interrupted by the war and his enlistment in the U.S. Navy. With the end of the war, Jim completed his studies at Cornell University, leaving for San Francisco after his graduation in 1949.

In San Francisco, Jim would marry Charlotte Winthrop Blaine, his wife for 47 years. While raising a family of four children in Woodside, California, Jim began an insurance brokerage firm, Vaughn & Blake, in San Francisco, which would prosper and grow for many years until sold to Fred S. James & Co. in 1970. In 1975, Jim became the CEO of Fred S. James and the family moved to New York City. Jim’s move east would continue over the years when he assumed the reins of Hogg Group PLC in London, the final act in a long and successful career in the insurance industry.

After the untimely death of Charlotte in 2001, Jim would continue to live his active life in London, Sun Valley and Pebble Beach where he would marry his surviving wife Rolande Ketcham in 2004. Throughout his very active life, Jim shared with family and friends his interests in travel, music, tennis, golf and shooting. Jim’s community interests included extensive board commitments to the Children’s Aid Society of New York and Sun Valley’s St. Luke’s Hospital.

He is survived by his wife Rolande and three children: Peter G. Vaughn (Jeannie), Patricia Pinney (William) and Diana Ryan (Peter). He is also survived by two step-children: Dania Ketcham and Scott Ketcham. Always the loyal husband and generous father, Jim very much enjoyed the company of ten grandchildren.

To order memorial trees or send flowers to the family in memory of James Vaughn, please visit our flower store.