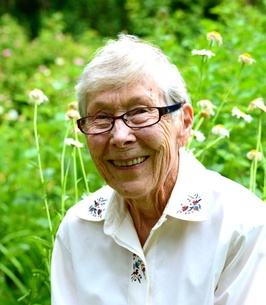 Shortly after her 90th Birthday, Teresa Bergin passed away in Boise, Idaho, on June 22, 2019. She was born in Hailey, Idaho, to Clara (Parsons) Walker and Johnnie Walker. As the daughter of a miner and the sister to older brothers, she developed her vibrant and outgoing personality at an early age as she spent her youth exploring the Wood River Valley, a valley that her family called home since the 1880’s. Younger than her two brothers, Johnny and Ken, she roamed free and happy as a child. She climbed and skied the hills in Quigley Gulch, rode horses and fished at her Grandparents ranch north of Mackay, and made the rounds in the coal wagon with a neighbor “helping” to deliver coal. While in High School, she had wonderful summer working at the Stanley Hotel, riding horses, and hanging out with kids from the Sawtooth Valley.
After she graduated in 1947 from Hailey High School with classmates who became her lifelong friends. She then spent a very happy year attending Idaho State University. She married Joseph Bergin, in 1949, whose calm demeanor was a perfect contrast to Teresa’s spirited personality. They settled in a tight-knit neighborhood in Bellevue, where they raised six children and ran the family businesses. Teresa was an active parishioner at the Catholic Church in Hailey, a volunteer at the Bellevue Museum, and a member of the Bellevue City Council. All of her life, she was a fervent Democrat active in local politics.
Teresa was “small but mighty.” She said what she thought and was always willing to stand up for others and fight anything she saw as an injustice.
She was a fun companion, who made every Sunday drive “up East Fork” or picnic at Redfish Lake an adventure. Whether she was on a drive over Trail Creek Summit or traveling around Alaska, Ireland, Italy, China, or New Zealand, all were opportunities for great stories, new things to see, and new people to meet.
Teresa loved her many friends and considered them as family. Her kitchen table was the center of life in her home, it welcomed many friends and family on a daily basis. She appreciated everyone that stopped by for coffee and lively political discussions.
Teresa was an avid gardener who loved flowers and every spring anxiously waited for her lilacs, copper roses, and fruit trees to bloom. She enjoyed hunting morel mushrooms in the spring, a self-proclaimed “mushroom hunter and some-time trespasser.” “You can just smell them,” she insisted. She liked gathering chokecherries and raspberries in the summer and harvesting tomatoes from her garden in the early fall. Her raspberry jam is considered precious and prized with family and friends.
The Wood River Valley was truly her home. Her great-grandparents came to the Valley as miners in the 1880s. She was passionate about the history of the Wood River Valley and the people who lived here. She never wanted to stray very far from “these mountains.” She was an active advocate for public open spaces and always a part of conservation efforts in the Valley. Teresa was on the committee that updated the original comprehensive plan for Blaine County.
Teresa is survived by five children Christine (Paul) Werner, Teresa (Brent) Connor, David (Kim) Bergin, Tom Bergin, and Margaret (Kevin) Satterlee; her grandchildren, Sean (Prudence) Bergin, Kristen (Lee) Cabrara, Sarah Saunders, Clare (Carrie Watts) Bodensteiner, Laura (Nico) Hernandez, Andrew (Briana) Satterlee, Ben Satterlee, and Kate Satterlee; and eleven (soon to be twelve) great-grandchildren, and numerous nieces and nephews.
She was preceded in death by her husband Joe, her daughter Rosemary, and her brothers John and Ken Walker.
The family wants to thank Vee Peterson, Betty Ann Mummert and Vicki Walker, who made it possible for Teresa to stay in her home as long as possible. We also want to thank the staff at The Terraces of Boise for their loving care of Teresa.
Services will be held at 11:00 on Friday, June 28, at St. Charles Borromeo Catholic Church in Hailey with internment in the Bellevue Cemetery.
The family suggests donations to the Wood River Land Trust, the Bellevue Museum, or a scholarship fund set up in Memory of Rose Bergin at the D.L. Evans bank in Hailey.
Services are under the care of Wood River Chapel.

To order memorial trees or send flowers to the family in memory of Teresa M. Bergin, please visit our flower store.