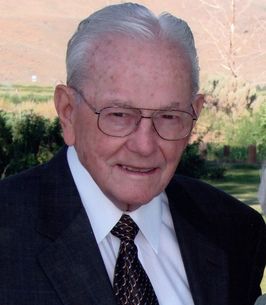 Funeral services for T. Verd Murdock will be Monday, July 8, 2019 at the Carey LDS Church. There will be a viewing beginning at 10:00 AM, with services to follow at 11:00 AM. Burial will follow the service at the Carey Cemetery.

Verd was born February 5, 1918, in Heber City, Utah, the son of James Crawford Murdock and Sarah Elizabeth Giles. He is preceded in death by his wife, Margaret, his parents, his 7 siblings, and two grandsons.

T. Verd, as he was known to his family and friends, attended elementary and high schools in Heber City. He was active in sports, and also student government where he was the Wasatch High School Student Body President.

Verd served a mission for the Church of Jesus Christ of Latter Day Saints from January, 1941 to February, 1943. He served in New York State, Pennsylvania, and then back again to New York. It was during this time that he met a sister missionary, Margaret Barton. He was impressed with her beauty and her musical talent. Margaret went home to Carey before he was released, but he was her District Leader and was assigned to take her to the train to go home. Verd felt impressed to ask her, " ... to not do anything about dating or romancing anyone until I get home." She didn't. He returned home February 5, 1943, and they were married on June 2, 1943, in the Salt Lake Temple.

World War II was on and Verd was drafted. He left Margaret and a newborn baby and answered the call of duty. After basic training in Kansas, he was transported to the South Pacific Theater; in particular, Manilla, Philippines. While in the South Pacific, Verd contracted malaria and was very ill. Verd said in his life history, lilt was here (Manilla) that I had the most scary and horrible experiences of the war. I was weak and highly nervous and irritable. Because of this, I thought I was the most scared and chicken of any soldier. I found out later I wasn't different or scared more than anyone else because of my taking on any dangerous assignment given to me".

Verd was involved in the Occupation of Japan at the end of the War in 1945. He was able to go home in 1946 and reunite with his family. He received a Bronze Star Medal of Honor for valor and for conducting fire under difficult circumstances against the enemy, as well as being under attacks from the enemy.

After his military service, Verd worked several jobs. For a time he was a hard-rock miner in Park City, Utah; as a retail clerk for the Heber City Mercantile, and then moved to Carey, Idaho, where he was employed by Adamson Motor Company. He worked there until his retirement.

Verd and Margaret served as faithful member of the Church of Jesus Christ of Latter Day Saints all of their lives. Together they served a Family History Mission in 1987, at Salt Lake City, Utah. They also served together in the Boise Idaho Temple for many years.

T. Verd Murdock served in many callings in his church; in several Bishoprics, as a councilor in the Blaine Stake Presidency, and a Bishop of the Carey Ward. He says in his life history, that one of his first duties as Bishop was to get the new church building started. He says that the cost of the new building was $441,459.00. It was dedicated on May 26, 1972. Verd said that this was one of the finest experiences of his whole life to be the Bishop when they built the present building, which is now the Blain'e Stake Center. He said the funds for the new building were raised and the building paid for before the last nail was driven.

Verd spent the last year and a half in Idaho Falls as a resident of Morning Star Senior Living Center. He quickly became friends with many of the residents and particularly the care givers. He was cheerful, positive, happy, and active until the last week of his life. The family wishes to express their deep gratitude and appreciation to those who cared for their father at Morning Star.

To order memorial trees or send flowers to the family in memory of T. Verd Murdock, please visit our flower store.