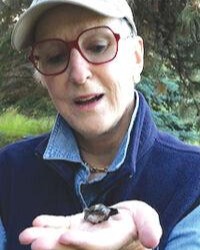 Susan Kren Cutter was born in Saginaw, Mich., on Aug. 10, 1943. She died of ovarian cancer on June 7, 2021, at her recently completed home in Ketchum, Idaho. She lived her life by her mottoes, “Change is good” and “There’s always more to learn.”

Susan’s family moved from Saginaw to Traverse City, Mich., when she was 10 years old, where she grew up and from where she graduated high school. She continued her education at the Washington University’s medical center’s Jewish Hospital of St. Louis, where she became a registered nurse. At Wayne State University, in Detroit, she graduated as a nurse midwife and worked as an OB-GYN RN before moving to California in 1967. While working as an emergency room RN in the Bay Area, she took flying lessons at Oakland International Airport. She obtained her private and commercial pilot’s licenses as well as her instrument rating and a multi-engine certificate and she qualified as a basic ground school instructor, at which time she became a life member of the Ninety-Nines: International Organization of Women Pilots. Her favorite plane to fly was a Cherokee Arrow 200.

In 1967, Susan began traveling the world, having visited several places multiple times. Her favorite trips included two Galapagos Island adventures 20 years apart, six trips to Hong Kong and an African safari in 1971. Susan and Ed Cutter were married in 1973 and she joined Ed on business trips to London, Duesseldorf, Cologne, Stockholm and Bermuda. After 30 trips to the U.K. Susan stopped counting. Her last adventure was a National Geographic cruise in 2017 to Iceland, the Arctic and Svalbard. Several years later, the coronavirus clipped Susan’s travel wings.

Susan and Ed lived in Belvedere, Calif., for 30 years with a part-time home in Stinson Beach’s Seadrift community. During that period Ed’s two sons, Eric and Spencer, lived with them and Susan saw them through elementary and high school and on to college at Tufts and the University of Pennsylvania. While living in Belvedere, Susan returned to school, graduating from San Francisco State University with a B.A. in art history and a master’s degree in environmental studies with an emphasis in computer cartography.

After Ed’s retirement from the Clorox Co. in 1998, Ed and Susan’s primary residence became Sun Valley with a fourth and final new house in Ketchum. Once the Cutters settled in Sun Valley, Susan resumed her childhood figure skating lessons with Herman Maricich as her instructor and she skated in Fashions on Ice shows. She also tried telemark skiing for five years as a new Sun Valley resident but her winter sport preference was the skating. Ed and Susan enjoyed duck hunting at the Old Curran Ranch Club in Hagerman, Idaho; fly fishing on Silver Creek, where they built their third home, and took repeated fly-fishing trips to Argentina, Chile and New Zealand. They spent 26 trips as guests at their favorite Ruby Springs Lodge, in Alder, Mont., beginning in 2000. Susan believed that fly fishing with one’s spouse was a competitive sport.

She purchased her first Macintosh computer in 1978 and with time became proficient enough to work as a medical-legal nurse for medical malpractice defense attorneys in San Francisco. She retired after consulting for 15 years. Always learning something new and experimenting with new ideas, Susan learned to swim in 2000 at Zenergy. She progressed into the masters group and loved swimming in the evenings during the cold winter months in the outdoor pool. Through the years she took multiple massive open online classes and several Cornell University ornithology classes, and as a voracious reader, transferred her love of books to her hand-held devices. She loved the book group that she helped start with neighbors, her Sun Valley garden was shown in the yearly garden tour, she showed German wirehaired pointers while living in the San Francisco Bay Area and among her diverse interests she took jazz piano lessons irregularly all her life.

Susan is survived by Ed Cutter, her husband of 48 years and his two sons, Eric and Spencer Cutter.

There will be no service and you are asked to send a donation to the Intermountain Bird Observatory Fund, Boise State University Foundation, 1173 W. University Drive, Boise, ID 83706. Please don’t forget the comforting care that our Hospice of the Wood River Valley provides to patients by sending them a donation to Box 4320, Ketchum, ID 83340.

To order memorial trees or send flowers to the family in memory of Susan Cutter (Kren), please visit our flower store.