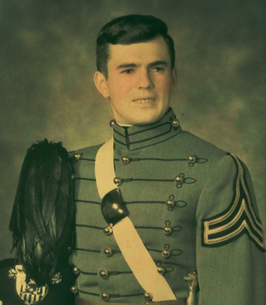 He is preceded in death by his father Mayo and mother Ruth Wilcox, and his brother David Wilcox. He is survived by his wife Clara Wilcox, his sister AnnMarie Coratinos, his daughters Stephanie Kane and AnnMarie Quilty, and his grandchildren Ian and Mackenzie Quilty.

He was born in Wendell, Idaho, to Ruth and Mayo Wilcox, the second of three children. He was a young entrepreneur trapping small animals, selling their pelts, riding his bike on a paper route, working the field all with his trusty side kick Dick Starkey and his brother/best friend David. He never shied away from hard work.
Stephen was an accomplished Glenns Ferry High School athlete and president of his class. He went on to be admitted to the United States Military Academy at West Point, where he excelled in academics and sports. He was commissioned in the U.S. Army as an Armor 2LT in June of 1971. His military career took him around the globe and he excelled in his career, as he did at everything. After a 22 year career in the military he went on to work at Booz, Allen, Hamilton for 20 years. A formidable business opponent, he was dedicated and to his team and his mission.

All this while during his career, he was a dedicated father who was able to help with homework and science projects, prioritized summer vacations to create long lasting memories, was in the bleachers cheering his girls on during gymnastics meets, track and field competitions, lacrosse games, and cheering for his daughter cheerleaders instead of the players at the high school football games. He raised his daughters to be strong, independent women that followed in his footsteps.

In retirement he moved to Sun Valley, a place that always had a special place in his heart. In January 2017, he married Clara Cifuentes. The two were inseparable for the last few years as they enjoyed all that Sun Valley has to offer.

Funeral services will be conducted at 11:00 a.m., Tuesday November 26, 2019, at the Presbyterian Church of the Big Wood, 100 Saddle Road, Ketchum, Idaho, with Pastor Mark Inouye officiating. A visitation will begin at 10:00 a.m. Interment with military honors will follow in the Ketchum Cemetery.
To order memorial trees or send flowers to the family in memory of Stephen Frederick Wilcox, please visit our flower store.