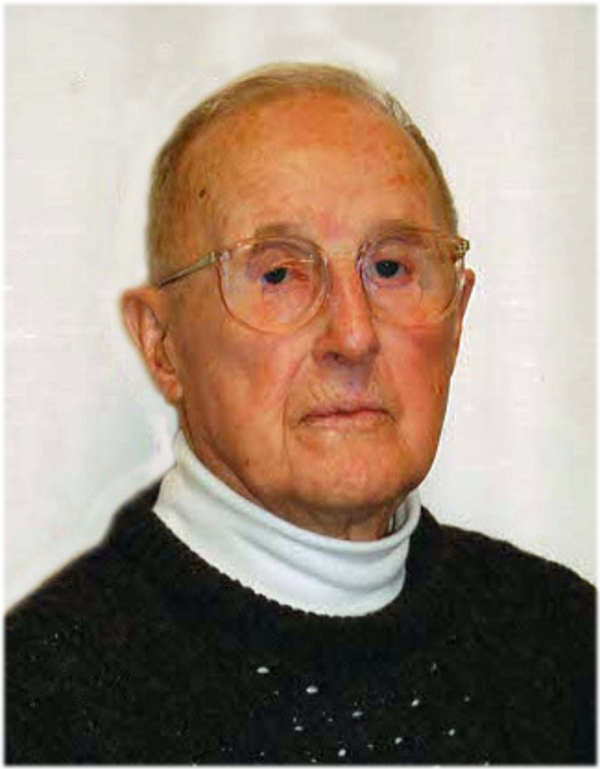 Allen Leander Spafford, 92, Sun Valley, ID, died on June 17, 2018. He was born to Allen and Virginia Spafford on November 28, 1921 in Cloquet, MN., and graduated from high school there as class valedictorian. He obtained the first of two chemical engineering degrees from Cornell University in 1943, then after three years of military service, the second in 1947. He also earned an MBA degree from the University of Chicago in 1969.
After Cornell ROTC training, Mr. Spafford was commissioned as a lieutenant in the Army’s Ordnance Corps at Aberdeen Proving Grounds, MD., had further training in the Corps of Engineers at Fort Belvoir, VA. And in late 1943 was ordered to Louisiana to join the 309th Combat Engineering Battalion, 84th Infantry Division.
The Division went into combat against the German Siegfried Line fortifications in eastern Holland in November 1944. It shifted to Belgium in December for the intense fighting of the Bulge, returned to Holland, waited out a deliberate flooding of the Roer River, and in late February as part of a coordinated Ninth Army attack forced a crossing of the Roer, leading to a pursuit of retreating German units across the Rhine and all the way to the Elbe, 60 miles from Berlin. Junction with the Russians at the Elbe ended all U.S. combat in Europe.
With the 309th, Mr. Spafford advanced from battalion motor officer to platoon leader, and as a captain, to company commander; he earned a Silver Star, and two Bronze Star medals for his performance in these duties. He completed his required three years of service as an officer in the Army’s military government. Stationed in Munich, he coordinated with getting Bavarian heavy chemical production going. He returned home in May 1946.
Mr. Spafford began his chemical engineering career in a process improvement group at Hooker Chemical Company, Niagara Falls, NY. Dissatisfied, he moved to heavy chemical sales, and then accepted an industrial chemicals development position with International Minerals and Chemicals Corporation, Chicago in 1954. He and Barbara Helen Zuger were married that same year, and in 1955 gave birth to a daughter, Alice Gallentine Spafford. They lived in Northbrook IL.
In his position at IMC he was deeply involved in investment analyses and long range planning; one achievement was his economic justification for IMC’s successful Saskatchewan potash fertilizer mine and refinery. Interestingly, he also contributed to negotiations with the Spanish government over the possible development of a phosphate fertilizer mining operation which it then controlled in Morocco.
He served briefly as a VP at an IMC related Boston chemical firm, but left IMC for a management position in the American subsidiary of the German chemical firm BASF, headquartered in Parsippany NJ. He ran its market research group, coordinated long range planning, spent a month with BASF’s strategic planning staff at BASF’s headquarters in Ludwigshafen, and then traveled widely in the U.S. to find buyers for unwanted chemical operations and to consider possible acquisitions fitting its strategy for the U.S. business. He and his family lived in Mendham Tounship, N.J. He retired in 1986.
Mr. Spafford was an enthusiastic outdoorsman all his life. Having mastered downhill skiing at an Army ski school in the German Alps while in Munich, and with his family who skied well, took many winter vacation trips to resorts in northern Michigan, Colorado, and Utah. Likewise, a number of summer vacations were spent hiking and backpacking in the Tetons, the New Hampshire White Mountains, and memorably, one in Yosemite Park’s high country.
He loved trout fishing as well. After retiring to Sun Valley he traveled a lot to fish the Idaho and Montana rivers flowing out of Yellowstone Park, as well as in the Park itself. Silver Creek was also important to him. Balance difficulties forced him to give up fishing and his other sports in his declining years, but he maintained his fitness with an almost daily Zenergy exercise routine.
Mr. Spafford is survived by his daughter and his wife of 64 years. By his sister Ann Spafford Herbert, his niece Virginia Herbert Vickory, and his nephews Dr. David Herbert, Laurence Herbert, and William Savage. He is preceded in death by his parents and his niece, Barbara Savage.
A memorial service will be announced in the near future. In lieu of flowers, contributions could be made to the Nature Conservancy, the Wood River Land Trust, or the Allen Spafford Memorial Fund of the Cloquet Educational Foundation, 302 14th Street, Cloquet, Minnesota 55720.

Please visit www.woodriverchapel.com to leave a message, share a photo or story and light a candle.

To order memorial trees or send flowers to the family in memory of Allen Spafford, please visit our flower store.