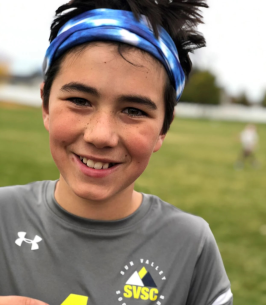 For 12 wonderful years, Sebastian “Sebi” Dutcher danced and played on this earth. He was born on Aug. 31, 2009, at St. Luke’s Hospital in Ketchum, Idaho, surrounded by family. And, on March 9, 2022, after a nine-month battle with cancer, he passed away wrapped tightly in his parents’ arms and in the comfort of his home.

Sebi filled the hearts of those who knew him. His kind and sweet disposition, radiating smile, soulful laugh and genuine desire to connect with others, charmed those whose paths crossed with his. His eyes were bright. His heart was pure.

Sebi lived life “all-in.” He put 100% of his heart into his relationships with all his family members, friends of all ages and into whatever he chose to do. He lived and loved hard every single day, but nothing brought Sebi more joy than the six years he had being a big brother to his sister, Emiko “Emi.”

Sebi loved his home in Idaho. He loved the mountains. He loved to ski, hike and mountain bike. He loved the lakes and rivers, swimming, jumping off rocks and cliffs, floating on rafts and tubes and stand-up paddle boarding.

Sebi often had a ball in his hands and never passed up an opportunity to throw or kick the ball, or toss bags. Sebi loved to read books and sports magazines, draw with pastel oils, collect sports cards and jerseys, listen to music, play with his dog, Auggie, tell riddles and jokes, play games, go camping and snorkel.

Sebi loved an adventure. He loved watching all the animals in Yellowstone, especially the wolves and bears, or watching whales off the coast of the Pacific. He was tireless boogie boarding, surfing and playing in the waves of La Jolla, or swimming with eagle rays, barracudas, sharks, turtles and other colorful sea life in the Caribbean.

He enjoyed the birds of the mountains and jungles of Central and South America while visiting ruins and learning about ancient cultures. He made special friends in far away places, people who carried him in their thoughts and prayers, reaching out with encouraging words and meaningful gestures of support. His parents thought they were preparing him for the world, but instead they take solace knowing his short life was filled with eye-opening experiences.

Sebi’s favorite food was “whatever my dad cooks”; however, at an early age he delighted in sushi and mushrooms of all kinds. He skipped to the food stalls in Oaxaca and seized every opportunity to eat clams, mussels and oysters. He loved diving for lobsters and eating them on the beach. Sebi’s fearless appetite was one of the best parts of traveling with him. He tried grasshoppers in Mexico, blood sausage in Colombia and barnacles in Spain.

Sebi loved sports, especially soccer. He was a team player and an excellent goalie, but also loved playing on the rest of the pitch. He relished in the wonderful soccer camps and clubs in the Wood River Valley. He was a passionate Tottenham Hotspur fan. Through his journey with cancer he was fortunate to hear from many of his heroes on the English Premier League team and several of his other favorite teams. His football team was the Chargers. His baseball team was the San Diego Padres, many of whom he got to meet one day at a game at Oracle Park in San Francisco while in a clinical trial at U.C. San Francisco. And his basketball team was the Golden State Warriors. He developed his insatiable appetite for sports early, and had an uncanny ability to absorb statistics and other information about sports.

In June 2021, a week after finishing sixth grade at Hemingway STEAM School as an honor roll student with a 4.0 GPA, Sebi was diagnosed with DIPG, or diffuse intrinsic pontine glioma. DIPG is a universally terminal form of brain cancer, found mostly in children. DIPG attacks the motor function region of the brain, stripping away physical abilities while leaving one’s mind intact.

Against insurmountable odds, Sebi summoned immense courage and strength as he took his diagnosis head on. He fought with tremendous bravery and fierce determination. He held onto hope. He held it tight. We all did.

Beyond his parents and sister, he had his entire family by his side throughout this journey. He was never alone. Grandparents, aunts and uncles, cousins as well as close family friends shared in his fight all along the way and they all carried his resolve. He was always surrounded by love.

His passion for life, his conviction to fight and win and his lust for laughter made a strong impression on the numerous people that came to know and love him in the hospital. And he loved them too.

Sebi leaves behind everyone he loved and who loved him, including his parents, Garrick and Kirstin Dutcher, and sister, Emiko Dutcher, of Hailey, Idaho; his grandparents, Carter and Linda Fjeld of Yakima, Washington, Renate “Omi” Dutcher of La Jolla, California, Jim and Jamie Dutcher of Ketchum, Idaho; his aunts and uncles: Christina and Chad Carlson of Boise, Idaho, Michiko Fjeld and Brian Raymon of Spokane, Washington, Kerri Fjeld and Mark “Shane” Gillispie of Sacramento, California, and his cousins: Arianna, Sofia and Natalie Carlson, Clay Davis, and Caden, Sage and Tala Gillispie.

Sebi was a child of the Wood River Valley and his community remained with him, supporting him and his family during and after his battle with cancer. He loved receiving the countless cards, video messages, meals, gifts and sentimental collaborations, from friends, coaches, teachers and strangers. Sebi remained sharp as a tack through to the end and knew what everyone did for him.

Sebi Dutcher, sweet, beautiful and brave boy, was a friend, son, brother, grandson, cousin, nephew and companion. Family meant everything to him. For all those who he filled those roles for, he will be in our hearts forever. He is a part of each of us.

A celebration of life will be planned for a later date, when it is warmer outside. Sebi loved the outdoors. In lieu of flowers, please consider donating to the Magic Valley Pediatric Cancer Coalition on behalf of Sebi at mvpediatriccancer.org

His mark is everlasting. His spirit is eternal. You are our hero forever. We love you forever.

To order memorial trees or send flowers to the family in memory of Sebastian Dutcher, please visit our flower store.