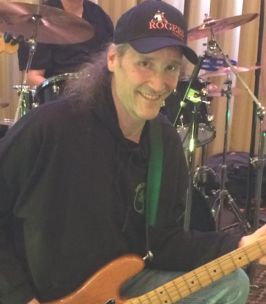 Robert (Bob) Worling Wallace, age 59, of Portland, Oregon, died unexpectedly while hiking in Hailey, Idaho, on October 22, 2021. As a man who was most at peace in nature, his family and friends take comfort that he took his last breath doing what he loved most.


Bob was born December 26, 1961, and grew up in Barrington, Illinois. As a child he loved building things, from an impressive train layout in his parents’ attic, to Heathkit models, haunted houses, and a fort complete with electricity and a brick-and-mortar chimney. As a young teenager, Bob discovered what would turn into a life-long passion for music, becoming an accomplished bass guitarist, ardent concert goer, and fervent listener. During a family trip to Colorado in high school, Bob discovered his heart’s true home was in the mountains. Armed with a Bachelor of Science in electrical engineering from the University of Illinois, Bob left the flatlands of Illinois for the mountains, ultimately landing in Portland where he settled into a life rich with friends, travel, and work.


Bob’s early career as an engineer focused on flat panel display designs for consumer and defense companies. In 1992, Bob earned the name “Bionic Bob” from hospital staff for defying all odds during his miraculous recovery following a serious mountain climbing accident. Bob then applied his engineering skills to brewing, becoming a brewmaster after training at Chicago’s Siebel Institute of Technology. He worked for the Bridgeport Brewing Company in Portland for more than 20 years, and as a consultant to many craft brewers in the northwest. An accomplished and talented musician, Bob most recently found a home with Portland band “Handsome Bob,” which he was quick to say was not named after him.


Bob loved all things outdoors. He loved to snow ski, hike, camp, climb…and a good cup of coffee, particularly if he was sitting beside a mountain river. He was known for his curiosity, subtle humor, fun-loving nature, contagious smile, compassionate spirit, and kind and gentle soul. Bob was a musician, engineer, photographer, adventurer, list-maker, avid journaler, and a quiet and insightful friend to all that were fortunate enough to know him.


Bob was preceded in death by his parents, Don and Jane Wallace, and stepbrother, Price Cherry. He is survived by his stepmother, Judy Wallace; sister, Julia Potter, her husband, Dan, and nephews, Adam and Nathan Potter; stepsister, Julia Lilley; and cousins, Rob and Karin Wallace.


Bob was a son, brother, uncle, true friend, and a uniquely wonderful human being. A memorial service will be held, and live streamed (https://youtu.be/5JUrwSPigOc), on January 8, 2022, at the First Presbyterian Church of River Forest in River Forest, Illinois (firstpresrf.org), at 2:00 pm. A celebration of life will be held in Portland, Oregon at a later date. In lieu of flowers, please consider a donation to The Nature Conservancy (https://preserve.nature.org/page/81523/donate/1) in memory of Robert Wallace.

To order memorial trees or send flowers to the family in memory of Robert Worling Wallace, please visit our flower store.