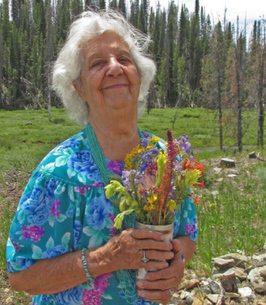 Rita Hurst, 88, was born in 1930 to May and George Green of Hailey, moved with her mother and stepfather, Walter Wade, to Beaver Creek in the Sawtooth Valley in 1936. Her father built the Beaver Creek Store, and owned the surrounding 10 acres, the family ran a logging company, providing timber for the mines and sawmills and supplying power poles to the local utilities. At a young age, Rita began cooking for the miners at the nearby Silver King and Eureka mines, along with sheepherders and trappers. As soon as she was old enough to drive she would help out by driving a 10-wheel logging truck up and over the narrow, dirt-covered hairpin turns of the old Galena Highway in the 1940s and ‘50s.

She married, Arthur Hurst, in 1953. The couple bought the timber operation from Rita’s folks and continued to log until 1958. They also tended sheep, living out of sheep wagons at times.
“I didn’t need to do it, but I loved it. I liked the smell of the pines and being my own boss.”
Eventually Art and Rita moved to Bellevue and ran the Bellevue Café for several years, luring customers in with her homemade cinnamon rolls. Off and on for over 20 years Rita also worked at the Silver Dollar Saloon.

In the 60’s she opened a second-hand antique, thrift store in one of the oldest houses in Bellevue. She ran the Thrift Store near the bike path that runs through Bellevue, until the 1990’s.

She was honored to be selected as Woman of Year and to be part of the Heritage Court in 2009. For 19 years she rode her horse in the Bellevue Labor Day parade and was Grand Marshall in 2018.
When Rita could no longer operate the Thrift Store she still kept busy in her later years, frequenting yard sales looking for more treasures for her home and yard.

Rita’s life was not an easy one, and to those that did not know her well, she often came across kind of gruff, but she had a tender heart, especially for those in need. She was a very giving person and ran a food pantry out of her home for a number of years.

Snippets of Rita’s colorful life over the summit can be found in the book Galloping Ghost of Galena by Pete Wyman. The public library in Ketchum and Hailey have copies of the book.

There will be no funeral or memorial service. Friends are invited to leave condolences at woodriverchapel.com.

To order memorial trees or send flowers to the family in memory of Rita Hurst, please visit our flower store.