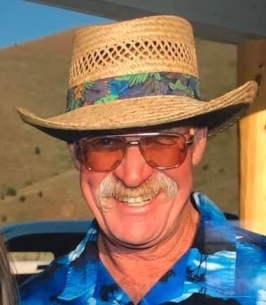 Rick, the son and only child of Earle Walker and DeIda Marie Brown, was born in Pasadena, CA, on August 4, 1945. He lived in Altadena, CA, until 1948, when he and his mother moved to Boise, ID. During his childhood years, Rick spent his summers with Ed Scott (Founder of Scott USA) and his family in Ketchum, ID. It was during these summer adventures that Rick’s love of the outdoors and the “Gem State” began.

After Rick’s mother married Harry U. Perry, an officer in the US Air Force in 1954, Rick became an “Air Force Brat,” as he fondly used to say. He lived all over the US until his family finally settled in Oscoda, MI, where Rick graduated from Oscoda Area High School in 1964. After high school, Rick worked as an optician on Wurtsmith Air Force Base.

Rick returned to Idaho in 1968 and settled in Ketchum, where he met and married Betty Kemmerer with whom he has a daughter, DeIda Marie Brown.

Rick later married Jane Bourne with whom he has a son, Jubal Ross Brown. Rick and Jane have lived off of Glendale Road, south of Bellevue, since 1981. Fond of travel, Rick and Jane also enjoyed spending winters at their home in Salome, AZ.

Rick and rural Idaho were the perfect match. The backroads and wilderness of Idaho were his lifelong playground. He cherished wandering far and wide on horseback, dirt bike, and ATV and hunting, fishing, and camping with his family and friends were among his most treasured pastimes.

Rick had a phenomenal memory and a true talent for telling jokes and swamping stories. He could be as eloquent as he was irreverent, and could make people laugh, even during times of heartache and loss. He was a magnet for coincidence, rare synchronicity, and spontaneous friendship. He would meet new people and run into old friends at the oddest times and in the most bizarre places. His wild and colorful stories and adventures were a signature of his zest for life and his fondness of connection. His stories will forever hold an unforgettable mark on the hearts of friends and family and will be a source of smiles and laughter for generations to come.

Rick’s fondness for adventure went hand-in-hand with his love of dogs and cars. He was rarely without a truck full of tail-wagging friends, and in his later years, loved passing the time tinkering on rat rods in his shop. His spirit and spunk (and car parts) live on in the antique cars, trucks, and rat rods of countless friends and family.

The genuine highlight of Rick’s life was his family—wife Jane, daughter Deida, son Jubal, granddaughter Skylar, and longtime closest friend and neighbor, Ken Smith. There was no greater joy or shining triumph in Rick’s life than spending time with family, sharing in his kids’ experiences and activities, watching them grow-up to be their best selves, and showering them with unconditional love.

Rick is survived by his wife, Jane Brown; his two children, DeIda (Duane) Runswick and Jubal (Jamie) Brown, and his granddaughter Skylar Runswick.

In lieu of flowers, a donation could be made to Wood River Gun Club.

A celebration of life is planned for later in the summer. Until then, in remembrance and perpetuity of Rick’s legendary storytelling and love of laughter, savor a fond story and happy memory with family and friends.
To order memorial trees or send flowers to the family in memory of Rick Brown, please visit our flower store.