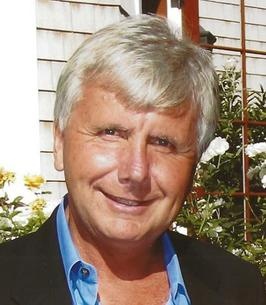 Richard Harrington, 72, was born in Buckinghamshire, England to Ivy Walker and James Cornelius Harrington. He spent his childhood in the English countryside with his brothers Tim, Jerry and Jamie Harrington and came to the United States when he was 16. He attended Palisades High School in Pacific Palisades where he met Susie Sievers, the mother of his first two children Kelly and Blake Harrington.

Richard continued his education at Santa Monica City College and transferred to the University of Southern California where he majored in History and was captain of the USC soccer team. During and after college, Richard began his business ventures manufacturing waterbeds, importing and exporting sporting goods, and made his first million selling Rubik's Cubes.

Through his intuitive sense of business Richard became the first international licensee of surf lifestyle apparel company Maui and Sons. He eventually purchased the business and became the CEO/Chairman at the age of 35. Richard brought Maui and Sons around the world with distribution in over 100 countries and made the brand the household name it is today. Maui and Sons led Richard to Cheryl Johnson, who became the mother to his youngest son Richie Harrington.

Richard had a great sense of humor and a British wit about him. He had a profound impact on all those who spent time with him. He loved the beach, the mountains, skiing, playing soccer and golf, fishing, flying airplanes, and traveling around the world.

Nothing mattered more to Richard than his family. He is survived by his children Kelly Harrington, Blake Harrington, Richie Harrington and his grandchildren Braeden Barash, Cora Harrington, and Teddy Harrington. He peacefully passed away surrounded by his family and loved ones in his home in Sun Valley, Idaho.

The family requests in lieu of sending flowers please send donations in Richard’s name to the American Brain Foundation. For information on the memorial service please contact Blake Harrington at blake@mauiandsons.com

To order memorial trees or send flowers to the family in memory of Richard Wickham Harrington, please visit our flower store.