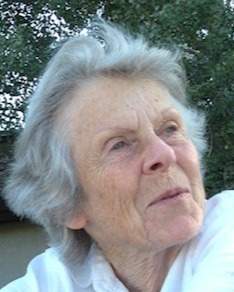 Nancy Arlette Bucknall passed away peacefully with family by her side on August 24, 2022. She was 89 years old. Arlette moved to the Hailey in 2014 to be closer to her youngest son and his family and had often been a summer visitor to the Wood River Valley for the twenty years prior. She loved Idaho and never missed an opportunity to go for a hike or a drive to look for wildflowers. Arlette was known by her friends and family as being gentle and kind, interested and interesting, thoughtful, and refreshingly down to earth. She will be missed by all who knew her.
Born in London, England on February 19, 1933 to Algernon Seymour Hoare and Wynefred Nancy Shorrock, Arlette was the youngest of four children. When WWII broke out in 1939 and the bombing of London started, the family moved to Winchcombe, a small town near Cheltenham in the Cotswolds. As was common at that time, Arlette went to a boarding school starting at a young age. She was always very homesick at school but made wonderful friendships that lasted a lifetime.
Arlette was adventurous and told many stories of trips with friends and family to Switzerland, Italy, and France in her early twenties. In 1957, she and her best friend set off for North America and worked in Toronto for several months and then traveled west across Canada and then back east across the US by bus from California to New York City. It was there that she met and fell in love with Robert Henry Bucknall. After a two-year, long-distance courtship, they married in London in 1961. The couple lived in New York for the first few months, then settled in Denver, CO where their first two children, Victoria and Christopher, were born. Missing the Northeast and wanting to be closer to England, they moved to Shaftsbury, Vermont in 1967. Their third child Mark was born in 1968. After divorcing in 1982, Arlette moved to the Mettowee Valley of Pawlet, VT outside of Dorset. Arlette was happy to spend countless hours tending to her flower and vegetable gardens and, with the help of her children, her son-in-law and many others, she created over the years a wonderful home that she cherished. Over a 25 year period, Arlette worked the front desk of the Dorset Inn and then the Wilburton Inn, which she so enjoyed. She was so engaging with all the guests with her genuine friendliness and helpfulness and, of course, with her proper English accent that she never lost even after 60+ years of living in the states.
Arlette's greatest love were her children and her grandchildren. She would do anything for them. She was always there to help watch, take care of, transport, feed, and just be there for any grandchild at a moment's notice. And it was so easy and natural for her. Even with distances separating her from some of her children, she always managed to be there for them and her grandchildren. Moving to Idaho allowed her the opportunity to be a part of the lives of her two youngest grandchildren after being such a huge part of the lives of her four other grandchildren when they were young and growing up.
Arlette's love of gardening led her to a role as a board member of the Mettowee Valley Land Trust where thousands of acres of development rights of farms in the valley were purchased, thereby allowing the farms to remain in the families and to be conserved as open space. She was also very active in the Bennington chapter of the Garden Club of America and was instrumental in creating and maintaining a project at the Veterans Home in Bennington where gardens were created for the enjoyment of the residents and where they could also participate in maintaining those gardens.
Arlette is survived by her three children, Victoria Silsby of Manchester, VT, Chris Bucknall (Janet Bucknall) of Davidsonville, MD, and Mark Bucknall (Heather McGregor) of Hailey, ID and six grandchildren, Elizabeth Silsby of Portland, ME, Sam Silsby of Portsmouth, NH, Emily Bucknall of London, England, Travis Bucknall of New York, NY and Cassidy and Mason Bucknall of Hailey, ID. In lieu of flowers, please consider a donation to Doctors Without Borders or the The Nature Conservancy, two of Arlette's favorite charities. There will be a small gathering in Vermont at a date to be determined. A special thanks to all of Arlette's carers at her house, Silvercreek Living, and The Cove over the last couple of years.
To order memorial trees or send flowers to the family in memory of Arlette Bucknall, please visit our flower store.