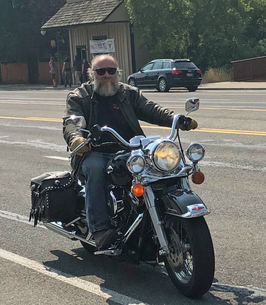 It’s a cool summer evening and shop lights shine brightly on the workbench in the garage. The garage door has been open since the sun rose and Mike has his hands woven into an engine he’s working on. It’s probably his cycle car project or, maybe, it’s the engine of his ’45 Harley Davidson or the engine of his daughter, Heather’s, 1984 Vanagon. Whatever project he has delved into for that day he’s intent on finishing it. He’s drawn a raw picture of the finished project on a yellow legal pad with rough, thick lines of No 2 pencil. Grease and oil have soaked into his thick hands and blackened his fingernails. Later he will try and scrub off the grime but remnants of it will remain soaked into the creases of his hands.

At least four or five friends or neighbors have come by that day. Some just to shoot the breeze, some to ask advice about life or others to get an opinion about one of their projects. If you had the chance to pass by his garage, chances are you left better off than before. Sometime in-between projects and visitors, he found time to devote to the school, driving the sports and activities buses and substituting routes. He found joy in this and driving the school bus was integrated into the fabric of his being in the last seven years. He loved the connections made with co-workers, kids, and teachers. He knew just about everyone by name, even after only meeting them once. Whomever he met he usually left a lasting impression.

On the weekends we would see him suit up in leather, ready to ride his motorcycle. He particularly enjoyed Sunday rides to find breakfast somewhere. He also loved those that shared this passion with him and developed priceless friendships over the years through riding and being a motorcycle enthusiast. He had a lot of motorcycles over the years. He took a long break from riding after his daughter was born in 1984 until she was in high school. He wanted to be sure that he was around for his family so he gave up his passion of riding for a long time. When he got back to riding, he rode a couple of different bikes, including some vintage ones. His wife, Mary or “Lovey” as he called her, convinced him to get a newer, more comfortable bike for riding long distances. He chose the Road King – immediately removing the extra seat and hard sided saddlebags, replacing them with a self-made custom leather covered single seat and black soft leather saddle bags. Mike looked forward to two big rides each year. One on Father’s Day Weekend where the group would usually go somewhere within the state or regionally. And Each August, Mike and his friends loaded up campers, dirt bikes and camping gear and headed to the Bonneville Salt Flats to attend the World of Speed races.

In the Summer of 1980 Mike’s life changed forever. Mike’s friend Ed Morinho’s family came to visit from Rhode Island. Mike met Ed’s sister, Mary. The Palo Alto, CA born Mike with his blonde hair, thick beard and sparkly green eyes fell in love with the beautiful, petite Rhode Island girl with long black hair. They found out that they were born just three days apart on different coasts. Mary on December 29,1956 and Mike on New Year’s Day 1957. In October of 1980 Mike sold a ’52 Chevy and bought a Greyhound Bus ticket and traveled across the country to Rhode Island to meet Mary and bring her back to Idaho. They traveled back to Idaho on their first of many road trips together. He proposed a few months later and the two were married in Jamestown, RI on July 11, 1981. They moved to the Wood River Valley together in 1989 and have lived there for the last 31 years. Mike loved the Valley and the nearby recreation opportunities, the landscape, and the beautiful skies.

Mike and Mary shared a lot of adventures, both before they had Heather in 1984, and after. Mike loved to take his family camping and worked hard over the years to make sure they were able to do it together. The fondest memories for his family include camping at Red Fish, Alturas, and Stanley. Mike loved fishing and enjoyed taking the grandkids, Reese and Harry, to Lake Creek for trout. He was always out fished by his girls but he was just fine with it. The girls were all too giddy to catch all the fish they could and he’d happily gut each one. In recent years being able to camp with the grandkids was pure joy for Mike. He helped his daughter restore the Vanagon and gave her a wonderful gift to carry forward, camping with her kids. Mike and Mary were the most beautiful couple putting everything into their child. They always treated each other with kindness and you could see the unconditional love pour from their souls. They loved each other fiercely and set an example for others in their marriage – setting a high bar. Perhaps their secret was the road trips they enjoyed taking together around the west. From Arches National Park with their daughter, to Monument Valley for Thanksgiving one year and countless trips to Arizona and Laughlin, NV – one of their favorite places to meet other friends and enjoy the sun.

Not only was Mike a wonderful husband, Mike was a terrific father to Heather. He taught her many things from negotiating a car deal to how to install a cabinet and more. He always took the time to explain things to her from the time she was very young. He never held back and always told it to her straight – just like he did with everyone. He did everything with Heather in mind and would do anything for her. He got the chance to be a Papa to Reese and Harry – doing for them things that he had done for Heather. He made a point to spend quality time with his grandkids and create a lasting bond with them. He always welcomed to them with open arms and big smile.

Mike was a fine woodworker who created many beautiful furniture pieces for his wife and daughter but also worked professionally in the trade for many years. His woodwork was precise, artistic and his pieces built to stand the test of time. He built and designed many things from wood. He used wood to craft the body of a Model A that he restored from a pile of scrap. He often used a piece of wood instead of scrap paper to jot down notes or a list for the hardware store – one of his favorite places to go. He used wood to make Mary a dry sink for their first wedding anniversary. He used wood to make Heather a beautiful dining table and buffet. He used wood to make Reese and Harry a stool. He learned the trade of woodworking from his late father, Wilfred Edwin Harder. They spent hours in the woodshop together. The beautiful work he did will live on in our homes and hearts for years to come.

There probably wasn’t a better place for Mike to grow up in the ‘60s and ‘70s. Palo Alto was Mike’s playground. He explored the creek near his home and discovered the neighborhood with his friends He was an energetic child who took an early interest in bicycles which lent to his interest in motorcycles in his early teens. His father and his mother, Joan Saner Harder, supported his interests in racing motorcycles at Fremont. His mother fondly remembers Mike as a young child wanting to be a cowboy like Roy Rogers. She was pulled over in her car by a motorcycle policeman and Mike caught a glimpse of that motorcycle and, at that point, horses were out and motors were in!

Mike left us on April 9, 2020 at 63 years young. He is survived by his Wife Mary Harder, Daughter Heather Harder, grandkids Reese and Harry; his Mother, Joan Saner Harder, and three siblings, Chris Harder, Lisa Weaver and Lorna Harwood. His free spirit, generous heart and kind soul will live on in those he has left behind. A celebration of life will be scheduled for late Summer.

To order memorial trees or send flowers to the family in memory of Michael E "Mike" Harder, please visit our flower store.