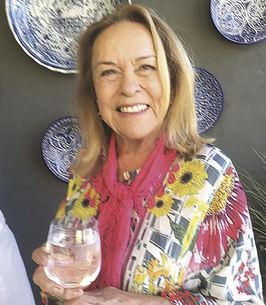 Mary Baglan Neivens passed away peacefully in her home in Ketchum on the evening of Sept. 9, 2019, after 80 years of adventure. She was a traveler who explored this world by ship, train, car and horseback. She was the person you would want with you on a vacation, or by your side in difficult times. She was a dancer, a smiler, a wanderer, a friend and mother. For Mary Neivens, life itself was a work of art.

She attended several colleges over a period spanning a decade, including Mississippi Women’s College, Southern Methodist University, University of Nevada at Las Vegas and Colorado State University at Pueblo, where she graduated with a degree in anthropology. She received a master’s degree in archaeology from the Universidad de las Americas in Puebla, Mexico.

Mary’s professional life was just as varied as her education. While a student at SMU, she paid for her own tuition by working nights and weekends. After two years in Dallas, she and a group of friends were moving to San Francisco by car when they broke down in Reno, Nev. She never made it to San Francisco, but she did find her way to Las Vegas, where she worked as a Copa Girl in the iconic Sands Hotel. This job allowed her to save money for her own dreams, as well as to send money home to her family.

Eventually, she was able to purchase a home for her parents and remaining siblings back in Greenwood. Soon she met Judy Jones, who shared a dream to travel the world, and the two started a lifetime friendship. In 1963 the two set out on their trip around the world, which included Hawaii, Japan, the Phillipines, India, Lebanon, Iran, Egypt, Spain and France. After all those experiences, Mary was ready to head back to the U.S. to make some money for her next adventure. In 1964 she moved to New York City and worked as a dancer at the Copacabana. She then joined the USO tour heading to Vietnam with rehearsals in San Juan, Puerto Rico. In San Juan, she met Dennis Neivens on the beach under a palm tree. The two fell in love and were married soon thereafter in Tortola, British Virgin Islands.

Mary and Dennis shared a passion for hard work and adventure. The pair lived in both San Juan and New York City, where Mary developed a career in real estate and helped Dennis with his rental property business. They invested in and renovated several brownstones on New York City’s Upper West Side, and in Viejo San Juan. Later they helped Mary’s mother, Mary Eunice, start a business called the Likker Legger in Greenwood. This business is still owned and operated by Mary’s brother, George Baglan.

After earning her degree, she worked as an archaeologist in Mexico, Guatemala and Belize, specializing in lithic analysis of obsidian from ancient Maya sites. Later she led an archaeological project at El Pozito, Belize.

Returning to New York City in 1974, Dennis and Mary began a new business with the purchase of an apartment building on the Upper East Side. To make this down-and-out former hotel profitable, Mary ran the manual elevator full time while Dennis served as the building’s super.

In 1980 Mary became a mother with the birth of her daughter, Nina Neivens. In 1981 Mary began a small business, Cheese & at 1308 Madison Ave. This restaurant is still in business today as Pascalou, owned and operated by her sister Lottie Baglan and brother-in-law Pascal Bonhomme.

After transforming their building to a co-operative in 1986, Mary and Dennis served on the board for 25 years. During that time the pair spent their summers in London and vacations seeing the world.

In the early 1990s, Mary and Dennis moved to Sun Valley, Idaho, to spend more time skiing and exploring the outdoors. During that time Mary developed a deep passion for the Wood River Valley and made it her home. As a resident of Ketchum, Mary was active in the local community; she served as room mom for the class of ’98 at the Community School, participated in the ski school race clinic and volunteered with the Idaho Special Olympics and Hospice of Blaine County.

Mary was always there for her family. When her daughter, Nina, became an archaeologist, Mary was right there with encouragement and advice. She helped her son-in-law, Francisco Estrada-Belli, with his project at the ancient Maya site of Holmul in Guatemala, where she worked as lab director. With the birth of her two grandchildren, Manolo and Bella Estrada Neivens, Mary was there to help while her daughter pursued her own Ph.D.

In her later years, she spent her time between her many homes in London, Guatemala, New Orleans and Sun Valley. Her friends Cheryl and Forest Hymas showed her the best way to experience the beauty of Idaho—from horseback. At the age when many people start to slow down, Mary instead became an avid horsewoman, exploring the backcountry and participating in the Wagon Days Parade with the High Country Riders and the River Grove Ranch riding group.

Mary was preceded in death by her husband, Dennis, and her sister Rita, both in 2017. She is survived by her daughter, Nina; grandson, Manolo; granddaughter, Bella; and her horse, Santiago. Services will be held at Light on the Mountains church on Saturday, Sept. 28, at 12:30 p.m. with a celebration of life to follow at Golden Eagle

To order memorial trees or send flowers to the family in memory of Mary Baglan Neivens, please visit our flower store.

Light on the Mountain Spiritual Center