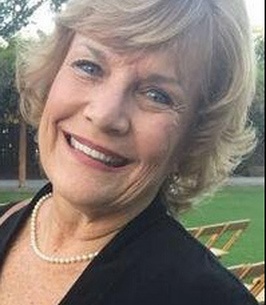 Marguerite Dolores Kopay Sowersby rose to the heavens on March 9, 2021, from complications due to COVID-19.

Marguerite was born in Chicago, Ill., in the summer of 1947 to Anton Kopay and Marguerite Hahn Kopay. She was the youngest of four with her three older brothers, Anthony, Gary and David. By 1950 the Kopay family had moved to sunny Southern California, where they joined other members of the family who had already made the adventure out west. Marguerite (Maggie as she was known then) attended St. Patrick’s Elementary School and Bellarmine-Jefferson High School in North Hollywood, graduating in 1966. During her younger years she along with her long list of cousins would get together and enjoy sweet treats Anton would bring home from working in the Burroughs as a service machine mechanic. An avid dog lover, her family raised a multitude of dog breeds over the years, including Basset hounds and Weimaraners. Gaining a love of gardening from her father, Marguerite certainly had a green thumb and always had the most beautiful yard and array of indoor plants. Orchids and roses were her favorite.

Football was always a staple in the Kopay household since all her older brothers played in high school and college. David went on to have a professional career, playing for the 49ers, Lions, Redskins, Saints and the Packers. She was so proud of all her brother’s accomplishments, on and off the field. After David’s career, he made the courageous decision to let the world know that he was gay. Marguerite was his immediate supporter and loved her brother for who he was, not who he loved.

After graduation Marguerite moved to Big Bear to become a ski instructor. Her cousin Fred Stifter would often come up on the weekends and enjoy a few runs and turns. Her love for the outdoors and such activities continued throughout her life. Many activities include snow skiing, water skiing, horseback riding, trapshooting and snowmobile riding through Yellowstone. But her hobbies certainly did not stop there. Often you could find her tableside with a puzzle and a margarita in front of her, playing mahjong and a myriad of card games. Her laughter and presence at these tables will be forever missed.

In the late 1970s Marguerite (Geets as she was referred to) moved to Ketchum, Idaho, for a career opportunity with Dean Witter, a stock brokerage company. On hard times she moved into a room provided by Dolores Sowersby. Soon after that she met her husband, Larry Brian Sowersby, Dolores’ son. Sparks flew quickly and they married in June of 1977. Their shared love for camping and outdoor activities was a quick basis for a true friendship and marriage. Larry’s career at Scott USA brought them to Ogden, Utah, shortly after their wedding. As she continued working for the SLC office of Dean Witter, they quickly made lifelong friends and found a new sporting hobby, trapshooting. This love extended their travels to Hawaii, Jackson Hole, Wyo., and later to Pocatello, Idaho, with the Shoshone trapshooting club. Once she and Larry became members, Marguerite was known as “Mother Goose” and Larry “Snow Stick,” since wherever she went, she had a flock of children in tow and Larry’s love for the slopes. In 1979 the Sowersbys’ careers brought them back to Ketchum, Idaho, where they remained for the next 30 years.

Longing to extend their family, they adopted a daughter, Megan in July 1987. She brought so much joy and love to Marguerite and Larry. Friends and family from afar came to welcome this little blond-haired, blue-eyed girl, a blessing to the new parents. In February 1992, another daughter, Alicia. Her beautiful brown hair and eyes completed the picture of this loving family. Alicia made the Sowersbys whole and provided a lot of laughter. She was affectionately known as Mama Bear. As a family the outdoor activities only furthered and were enjoyed by all. Marguerite doted on her daughters and made an appearance at field trips and school events. In October of 1998, tragically, the Sowersbys suffered the loss of Larry. Taking over Larry’s insurance business created more time to be there for Megan and Alicia. They became known as the Sowersby Ladies. Marguerite’s strength and perseverance to keep her head high and her daughters loved will never be forgotten. She absolutely loved and was so proud of her girls.

In 2015 Marguerite decided to leave the comfort of the Wood River Valley to be closer to her children in Arizona. In true Geets fashion, her home was where her family was, and she blossomed into a caring part of her community. She enjoyed her friends and her park and had many planned activities weekly. She met a caring man, Rick, who gave her a few years of love and friendship. They both loved vintage automobiles and enjoyed going to car shows together. In January of 2018 Marguerite added a new title, Yaya. Her grandson Harley was everything she had hoped for. She enjoyed spending time in San Francisco with Alicia and her husband and grandson. Another joy, named Maya, arrived Valentine’s Day 2020. Marguerite’s heart and soul were full.

In January 2021, Marguerite made that beloved trip to San Francisco to spend some quality time with family, Harley turning 3 and Maya turning 1. Unfortunately, with these difficult times, Marguerite became ill with COVID. She spent a few days in the hospital and was sent home in the hope she would recover slowly and with some rest. The uncertainty of the virus had much different plans and Marguerite succumbed to the complications. She was surrounded by her brother David, daughter and son-in-law Alicia and Victor, daughter and daughter-in-law Megan and Marissa, longtime family priest Father Bill and close family friends Kim, Xole and Collen and Larry. Her love and joy were cherished by many, near and far.

If you would like to send cards or sentiments for Marguerite’s family, you may send them to her oldest daughter, Megan Black, at 2700 S. White Mountain Road No. 523, Show Low, AZ 85901. Services will be held later in 2021 in Hailey, Idaho. All will be welcome to attend.
To order memorial trees or send flowers to the family in memory of Marguerite Dolores Sowersby, please visit our flower store.