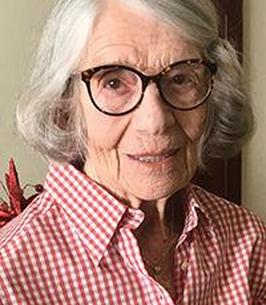 For nearly 99 years the world was graced by the presence of a loving mother and beloved friend. Her childhood years were spent in Paris, France, and then later in Massachusetts, where she was raised by her uncle, Vanevar Bush, the director of scientific research and development during World War II. She recalls seeing the first-ever plastic bag in existence and overhearing moral arguments with President Truman concerning the use of the atom bomb. She once worked as assistant to the dean of residence at Radcliffe College and taught French at The Community School in Sun Valley.

She never let you speak poorly of anyone she loved and was allergic to all injustices, especially to her favorite companion in life, Waldo the wiener dog. Her most prominent advice was to always follow your heart, regardless of the outcome. She was French to the core and never apologized for leaving something verbally unsavory in the punch bowl as long as it truly represented what she felt at the time. She had more spine than most and once after being offended by her husband in the early ’50s, took their three children and drove from Boston, Mass., to Guadalajara, Mexico, in a convertible Pontiac, just to be punitive. She had a love affair with the beauty in Idaho and the smell of the California ocean.

Thank you to many caring friends and loved ones who often visited her and brought joy to her in her later years as well as the impassioned caretakers of Safehaven. We owe you all a debt of gratitude. To quote a great man, “If I had but one blanket and one can of beans and I had to share it with just one person, it would be with Marguerite DeBaun.” We will miss you terribly.

To order memorial trees or send flowers to the family in memory of Marguerite Davis DeBaun, please visit our flower store.