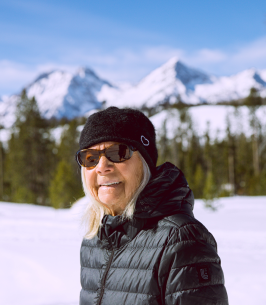 Margaret Jean Murdock Hupp, teacher, mother, grand and great grandmother, and long-term resident of Hailey, Idaho passed peacefully in her home on March 6, 2022. Margaret was born in Detroit, Michigan in 1934 to Harold and Edna Murdock and later moved to Los Angeles with her family. She graduated from University of Santa Barbara with a major in Education and taught in public elementary schools for over 40 years in Palos Verdes, California and later in Hailey, Idaho. She was named the Palos Verdes Peninsula Educator of the Year, and received the Ladera Linda PTA Honorary Service and the Palos Verdes Peninsula Unified School District Golden Apple awards. A mentor teacher, she had a profound impact on her many students and teachers alike, and to this day has many surviving friends in the university and teaching communities.

A fiercely independent woman and a lover of the outdoors, Margaret moved to Sun Valley, Idaho over 25 years ago. Margaret loved her life in Sun Valley, originally coming to the Valley via the Snowball Express train in the 1960’s that would leave out of Union Station in Los Angeles. The family enjoyed growing up skiing here from her second home, which was one of the original Villager Condominiums.

Margaret moved to Hailey full time in 1998 to be close to family members living in the Valley, and spent many years growing a bountiful garden, hosting family and friends on the back patio, and spending time cultivating her beloved rose bushes. Her favorite daily exercise was her daily 1.5 mile hike out Quigley Canyon, and she enjoyed the SV Music Festival, boating on Redfish Lake and watching the 4th of July fireworks from her backyard. She made the world’s best spaghetti, a phenomenal spritz holiday cookie, and loved the Hallmark Channel and cheesy rom-coms more than she would like her family to admit.

Margaret is survived by her two daughters, four grandchildren, one great grandson—including former Hailey residents Hilary Furlong, Kelsey Furlong Cox, and Kyle Furlong—and many loving family members. Her grandchildren were her pride and joy, and she was especially excited to share the joy of her most recent, and only great grandchild. Margaret will be deeply missed by family members, friends, and all who knew her. In remembrance of Margaret’s life, the family asks that any charitable donations be made to the Sun Valley Music Festival in Sun Valley, Idaho.

To order memorial trees or send flowers to the family in memory of Margaret Jean Hupp, please visit our flower store.