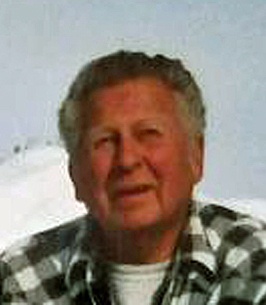 Whitey Beck of Ketchum passed away Saturday, February 16, 2019 at the home he built in West Ketchum in 1953. Linden and his faithful cat, Cybil were by his side.

Whitey was born in 1932 in Rupert, Idaho, the second child of Inez and Andy Beck. He was raised by his grandparents in Rupert and spent his summers fishing and hunting at their cabin on Sandy Lane in Board Ranch. In 1949 at age 16 he came to Sun Valley where he would spend the rest of his life.

Whitey lived at Sun Valley/Union Pacific and worked at the Trap Field and the bowling alley setting pins while attending Hailey High School where he graduated in 1950. After graduating, he cooked in Sun Valley for 20 years while also logging and working at The Casino and Slavey’s in his “spare” time.

Later he was a butcher for Atkinson’s Market and the Golden Rule. Whitey became so wellknown for his meat-cutting mastery that soon he would be bombarded with the local hunters’ requests for game-cutting which continued until he was in his eighties.

Whitey was most known for his colorful storytelling about his countless adventures fishing the Salmon River and hunting/hiking every mountain in the valley. Even in his later years, Whitey was never idle. He was either tending his massive garden, building bird houses and feeders, or tying flies for everyone in the valley.

A Memorial Service will be held at the LDS Church on Spruce and Sun Valley Road in Ketchum on March 2nd at 11:00 am. A gathering will follow at the American Legion Hall at 220 Cottonwood Street, Ketchum.

In lieu of flowers, donations can be made to Hospice of the Wood River Valley P.O. Box 4320, Ketchum, ID 83340 or the Sun Valley Volunteer Firefighters Association P.O. Box 1262 Ketchum, ID 83340
To order memorial trees or send flowers to the family in memory of Lowell K. "Whitey" Beck, please visit our flower store.