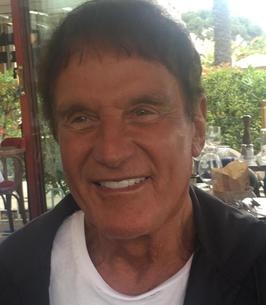 “The Wonderful Life of Mr. Wonderful”

Leslie D. Rosenberg, was born January 22nd, 1941 in Seattle, WA. He grew up on Lake Washington, attended Lakeside School for a short period and graduated from Franklin High School. He was a natural athlete and participated in many sports, but his love of football became a priority. At Franklin he participated in football drills as a defensive end and spent long hours studying the art of the game. Before it became fashionable, Leslie would lift weights with his friends regularly in their makeshift basement gyms.

Leslie attended the University of Washington where his passion for college football and the University grew. There he played football under Jim Owens, was in a super cool Jewish Fraternity and studied Business. He was in the Air National Guard before he went to work for the family business, Weisfield’s Jewelers.

In the Winter of 1956-57 Leslie and some of his best buddies spent all their ski weekends in Sun Valley, ID to become fixtures around the town. He would prepare for these sunny excursions by spending time under a sun lamp to condition his face for the strong rays on the hill. “He accomplished his dual mission of experiencing great snow as well as coming home with a great tan.” – Bill Taraday

In 1958 Valu-Mart, a division of Weisfield’s Jewelers was founded. The chain started as a discount store which was upgraded to junior department store in 1973. The name was changed to Leslie’s in 1974, and in 1976 the stores (21 locations in 5 states) were leased to Fred Meyer.

On November 16, 1961, President John F. Kennedy came to Seattle in part to honor Senator Magnuson at a dinner at the Olympic Hotel. Leslie and his grandparents Leo and Sarah Weisfield sat at a table 20 feet away from the President. Leslie always admired President Kennedy and getting to meet him was a highlight he enjoyed sharing, along with meeting Frank Sinatra…

During the 1970s, Leslie was instrumental in getting Weisfield’s Jewelers to sponsor the unlimited hydroplane, U-74 Racing Team. Leslie’s decision to recruit William “Billy The Kid” Schumaker was met with success in that, with Billy at the helm, the Weisfield’s became one of the nation’s top performing boats. Another boat on the circuit was Pay ‘n Pak, owned by David Heerensperger with whom Leslie became friends. After Weisfield’s racing days had ended, Heerensperger encouraged Leslie to become an early investor in Eagle Hardware around year 1990. Such business decision by Leslie paid great dividends in 1998 when Eagle Hardware and Garden was sold to Lowe’s Companies, Inc.


In the 1980s, while Herman Blumenthal, Leslie’s stepfather was president of Weisfield’s, Herman came to Leslie advising him that he was about to accept an offer from Signet in the UK to purchase Weisfield’s. Leslie had been anticipating such an offer for some time and had mapped out a strategy for negotiating with whatever buyer might appear. Single-handedly he was able to affect a sale at a substantially higher price than the original offer. Holders of Weisfield Jewelers stock received a handsome benefit from Leslie’s behind the scenes actions for which he may not have received much acknowledgement or credit. Many unfortunately considered him to be too tan, too handsome and too much of a potential playboy to be considered a serious businessman. Under Leslie’s management, Weisfield’s grew to one of the largest retail jewelry chains with 87 stores in 9 states. Weisfield’s was sold in 1989.


From then on Leslie spent his time on various hobbies and supported several Seattle Philanthropic organizations. He was a major donor for the ARCS Foundation, Poncho, and the University of Washington’s Tyee Club. Since he was the youngest member and (now possibly the oldest member) of the Washington Athletic Club, from the age of 15 years old, he loved to box and be in the gym, where he would brag about having sparred with George Forman (there is a recording).

Leslie was married to Candice (Rosenberg-Peterson) in 1974. They divorced in 2001. They had two daughters.
In 2005 Leslie married DeAnn (Mix-Rosenberg). DeAnn brought Leslie 4 more daughters and 16 grandchildren. With DeAnn, Leslie found a new love of travel and cruising in the Spring. Leslie being extremely generous, shared his love for European boat excursions by taking his whole family on a cruise 5 years ago. It was a trip of a lifetime.

Leslie was a social character who was given many nicknames: Burger, Johnny Dark, Johnny Montana, Picture Perfect, and just plain “Les” was superman to all.

Leslie passed away Sunday April 5, 2020, at the age of 79.
To sum up a complex man, we want everyone to know that he loved his family, his hair and his tan, but the thing Leslie loved the most in this world was the University of Washington Football. He was a devoted son, husband, father and grandfather. He was gracious, generous, kind, loving, silly, social, engaging, and a father figure to so many who lost their own fathers. He loved to ski in Sun Valley for over 75 years and go boating on his favorite body of water, Lake Washington. He loved to listen to Frank Sinatra and sing like him too. He was an athlete, lover of nature, lover of dogs, and solitude. He loathed clutter, loud noises, and rushing into anything. He loved Coca-Cola and his reflection in the mirror. He believed in goodness and being a good person. He was a oxymoron in himself. The man who was a creature of habit was also constantly growing and evolving. The man he was, he finally became. We will miss him and honor him.