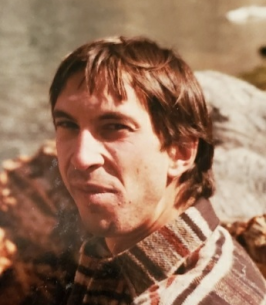 Karl Christopher Charron, 66, passed away in Ketchum, Idaho on January 14, 2022 after a progressive illness. He was born in Pawtucket, Rhode Island, grew up in Lincoln, R.I. and enjoyed family vacations at York Beach, Maine and long-distance bicycle day trips through RI and MA with his teen friends, among other activities. He spent a few years working in the Bay Area of CA and moved to Ketchum in 1981 becoming a 40-year resident of the Wood River Valley.

Karl was a 30-year employee of Atkinsons Market in Ketchum and loved Idaho for its great outdoors and the many fine people he met. He played volleyball early on and grew a tireless passion for hiking, backpacking, fishing and rockhounding across several northwestern states. Karl was the antithesis of modern tech and loved board games where here he shamelessly defeated everyone in his path at whatever poison was picked.

Karl was full of heart, kind, gentle, independent and made close friendships. Those who knew him well appreciated his sense of humor and tongue-in-cheek outlook on most everything. He was an indisputable master of one-liners. He is dearly missed.

Karl is survived by his sisters Marcia Pena in RI and her adult children, Penny McCloud (Terry) in Indiana and his brother Craig Charron (Barbara) in Maine and their sons, many cousins, and uncles and aunts Jean and Kathy Charron, Ted Charron, Mildred Charron and Paul Barnum. He was preceded in death by his parents Winona (Nona) and Stanley Charron.

In late spring or early summer when the weather is warmer and gatherings safer there will be a memorial celebration get-together in Hailey, Idaho. It will be announced in late April or May in the Idaho Mountain Express. We like flowers but in lieu of them we prefer you think about him often.

To order memorial trees or send flowers to the family in memory of Karl Christopher Charron, please visit our flower store.