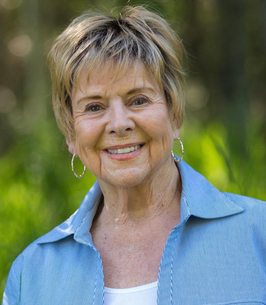 JoAnn D. Boswell, born November 11, 1932 in Estevan, Saskatchewan, Canada to Hazel and Alexander Schnell, passed away peacefully at home in Elkhorn on August 28, 2019.

JoAnn's family moved to Los Angeles, California in 1939. She attended John Marshall High School where she met and eventually married Richard Thornton Boswell. They soon moved their young family to Three Arch Bay in Laguna Beach, California, where JoAnn lived for 26 years prior to her move to Sun Valley.

In the late 60's JoAnn and her husband rode the Snowball Special train from Los Angeles to Sun Valley where they came to love Sun Valley in winter. Over the years they went on many adventures, including canoeing and portaging in the boundary waters of Minnesota and Canada with their children, a memorable trip down the Middle Fork of the Salmon River with kids in tow, and separate backpacking adventures with each of' their children in the High Sierras. JoAnn also backpacked all on her own, something not done in those days.

JoAnn moved to their condo in Elkhorn to test out full-time living in Idaho. It took no time at all for her to decide this would be the next chapter in her life, so she built a home in Elkhorn where she lived for 25 years. In that time, her adventures and philanthropic activities were many. She befriended Ann Hollingshead, the co-author of one of the Valley's first trail guides, and together they started a Thursday hiking group that still exists today. She joined the Board of Directors for the newly established Elkhorn Music Festival, which 30 years later evolved into our incredible Sun Valley Music Festival. For many years JoAnn was a Hospice volunteer. Her volunteer work and commitment to her church, The Presbyterian Church of the Big Wood, were most important to her.

JoAnn leaves behind her beloved family: daughter Patrice (Mark) Cole of Hailey and their children Kyle (Emily) Cole of Boise and Kristen Cole (Fabian Scheweder) of Vienna, Austria, daughter Stephanie Boswell Catron and her children Hazel, Hank, and Hayden of Moraga, California, brother Virgil Schnell, sisters Jackie Waldron and Dianne Polver, and many, many nieces and nephews. Her son, Craig Boswell, preceded her in death, as did her husband of 32 years.

A memorial service will be held at The Presbyterian Church of the Big Wood on September 28th at 2 p.m. Donations in her honor can be made to Hospice of the Wood River Valley, the Wood River Trails, and the Sun Valley Music Festival.
To order memorial trees or send flowers to the family in memory of JoAnn D. Boswell, please visit our flower store.