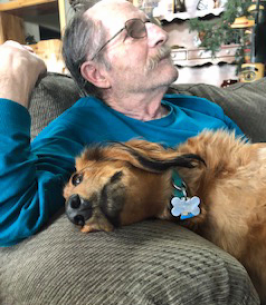 
Jeff slipped the surly bounds of Earth on Monday, April 20, 2020, after a year long courageous and hard fought battle with cancer. He died at home, where he wanted to be, surrounded by his wife, and many masked friends practicing social distancing. He attended 8 years of Catholic School in Pocatello and his high school years at Highland High School. Thereafter, he attended two years at Idaho State University.

While growing up, Jeff joined his father working at the family’s meat packing business. He started on the killing room floor at 10 years of age, and progressed to becoming a master meat cutter after many years in the business.

In 1978, Jeff and his friend, Kenny Millward, moved to the Wood River Valley and made it their home. Shortly after arriving, Jeff met Stan Atkinson, who offered him a job as a meat cutter in Atkinsons’ Market, where he remained employed in the Hailey Store and the Ketchum Store until 2005. Jeff was to many of his customers their “Go-To” man for the appropriate cut of meat for their dining pleasure in addition to how to cook it! He then took on the role of “Fish Monger” learning everything he could about seafood, well liked and popular fish as well as exotic fish dishes and their preparations to the delight of many of his customers.

Jeff met the love of his life, Cathy Negreponte, on Valentine’s Day in 1981. They were never separated from that day forward and married on August 31, 1984. He gained a loving wife and a step daughter, Christye, all at once and became a family man, which was very different from his “Blues Brothers” lifestyle he so thoroughly emulated and enjoyed!

Jeff’s passion was fishing. He was an avid fisherman who knew where all the best fishing holes were in the Big Wood River as well as the Salmon River. Jeff and family enjoyed many vacations parked along the Salmon River fishing for steelhead. Then he went on to bigger fish in Riggins, Idaho, where salmon were abundant and he knew just how to tease them to his line. All kinds of delicacies were served by Jeff’s professional and artistic applications of fish: locks, smoked salmon, grilled salmon to its perfection, along with all kinds of shellfish. If it came from the ocean, Jeff loved it.

Jeff and Cathy moved to the family farm on Baseline Road in August 1993 where they took on the challenge of farming and raising sheep. Jeff loved the land and treated it with reverence and respect. With the help of his friend, Rocky Sherbine, Jeff learned all about water, water rights, and how to keep it flowing to sustain the fields on the lower end of the Bellevue Triangle.

Another one of Jeff’s passions were his classic cars. He would drive one car for each day of the week during the summer. His ’55 Chevy Nomad, his ’55 Chevy Bel Aire, his ’56 Chevy Nomad, his ’53 Chevy Bel Aire and his 1928 Ford Model A. Jeff reveled at the fist pumps and high 5’s he would get cruising down the highway. He was in his element during spring, summer, and fall soaking up the warm sun and giving those sharing the road with him a good time and a better story to share at the dinner table that night.

Jeff is survived by his wife, Cathy, his stepdaughter Christye (David Lenon), his brother Greg (Tracy) and nieces, nephews, and many cousins. At his request, no service will be held. He asked that the next time you land a fish that you think of him while exclaiming, “Fish On!”
To order memorial trees or send flowers to the family in memory of Jeffrey Blaine "Jeff" Zaccardi, please visit our flower store.

Memorial Celebration will be announced