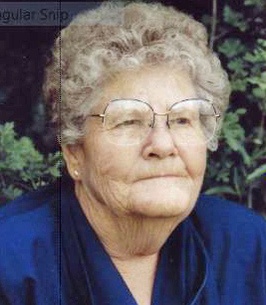 Jean Elexis Pyrah, 99, of Carey, was born January 15, 1920, in Arco, Idaho, to John Sterling Hurst and Effie Perry. Her mother died when she was six years old, and she and her two younger sisters, Cleone and Nina, were then raised by a handful of relatives who moved them from family to family until they graduated from high school. Jean attended grade school in Fish Creek, Ashton, and Caldwell and graduated from Carey High School.
The high school years were a joy to her as she participated on the paper staff, played a piccolo in the band and rooted for the athletic teams as a cheerleader. During her high school years she worked at the Carey Telephone Office and in a café to earn money to help support her younger sisters who were often times living in separate places with different relatives. She graduated from high school in May of 1938 and the following month married Allen Wayne Pyrah on June 2, in the Salt Lake L.D.S. temple.
The young couple spent the next forty-two years farming in Carey and raising their seven children. Jean was very determined that her children would have a better life than what she had experienced and dedicated her entire life to supporting and loving her children, and her children’s families. She was very proud of her family and made an effort to attend most of their athletic contests, their plays and music recitals. She was always one of the best fans on the football sidelines.
She extended her love to many other children in the Carey valley, serving as a president and teacher in the church primary and serving in the stake Relief Society organization. She was also a ward librarian and spent ten years working at the Boise, Idaho Temple.
In addition to religious service, she spent many years in 4-H, teaching young girls the art of sewing and helped to oversee and organize the display buildings during the August County Fair.
Jean was an artistic sewer and spent many hours creating wedding dresses, prom dresses as well as everyday clothing for her children. Her great love was in making quilts. As time passed she made a quilt for each grandchild that graduated from high school, each one that got married and numerous baby quilts for every new grandchild, great-grandchild and great-great grandchild that came along. That ended up being a lot of material and effort for she had 25 grandchildren, 83 great grandchildren and 8 great-great grandchildren.
In 2010 Jean was honored as a member of the Heritage Court and had a fun time riding in the parades in Blaine County with the other honorees.
Jean passed away June 25, 2019, at the Ketchum St. Luke’s Hospital surrounded by the love and respect of her family members. Her quick wit and independence accompanied her right to the closing hours of her life. She was preceded in death by her parents; her two sisters, Cleone Hoffman of Anchorage, Alaska, and Nina Hurst of Caldwell; and her beloved husband who passed away in 1980.
She is survived by her children, Helen Bingham of Twin Falls, Kurt Pyrah (Lynda) of Nampa, Bob Pyrah of Carey, Amy Mecham (Ken) of Carey, Marsha Ravenscroft of Hagerman, Debbie Howard of Nampa, and Jon Pyrah of Carey, and her fore-mentioned posterity.
Funeral services will be held at 2:00 p.m. Saturday June 29, 2019, at the Carey L.D.S. church, with a visitation beginning at 1:00 p.m. Interment will follow in the Carey Cemetery. The family wishes to express appreciation for the compassionate and skillful care of the medical staff at the hospital.

To order memorial trees or send flowers to the family in memory of Jean Elexis Pyrah, please visit our flower store.