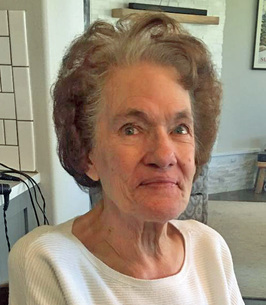 Nona “Jean” Clayton returned to her Father in Heaven Sunday, April 28, 2019. She was born March 16, 1937 in the Minidoka area and was proud she was delivered by her Grandmother on their farm. The best description of Jean would be Salt of the Earth. She was a simple person who held to simple values and didn’t waiver from them. She was born to Leland and Gladys Olson and grew up farming in the Burley area. She was a hard worker always ready to roll up her sleeves and get the job done.

Jean met William “Bill” Clayton while working at King’s in Burley. They married March 18, 1960 and welcomed their first born son, Wayne, in December. Bill was attending school at Utah State University and Jean was always his biggest supporter. After earning his degree in Education, the family of three moved to Rupert where Bill taught Industrial Arts at Minidoka High School. Valerie was born in 1964 to complete their family.

The family moved to Hailey, Idaho in 1969. Around 1975, Jean began driving bus for the Blaine County School District. She enjoyed being part of the educational system as the first one to greet the children in the morning and the last to send them home in the afternoon. Her favorite part of the day was driving the Kindergartners at midday. Jean and Bill opened Bill’s Gun Shop in 1987 and later changed the name to High Desert Sports. After Bill died in 1998, Jean continued running the business with Wayne. She was still working up until a couple of weeks before her death. She felt working at the shop gave her purpose and enjoyment.

Bill and Jean raised their family to enjoy the outdoors. They enjoyed hunting, fishing and camping. When Jean was not spotting game for Bill, she was supporting her children in any activity they were involved in. She was a selfless mother who put the needs of others ahead of her own.

Jean’s greatest joy were her two Grandsons, Trent and Nate. Her unconditional love for them was evident in all she did for them. She spent many afternoons watching Trent play sports, particularly baseball. She supported Nate with any endeavor he choose to undertake. She was a proud Nana who would tell anyone she meet about her boys. In December, she witnessed Trent’s marriage to Tiffany and was overjoyed to finally have a Granddaughter.

To order memorial trees or send flowers to the family in memory of Jean Clayton, please visit our flower store.