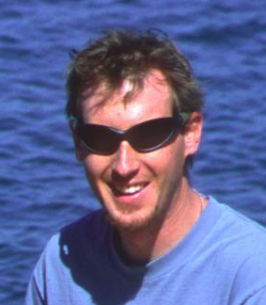 James Colin Stelma was born in Sun Valley Idaho on September 28, 1974 to Phil Stelma and Evan Lister Stelma. Colin was an avid fisherman, outdoorsman, and proud father of his daughters Alexandra and Annabelle.

Although he unexpectedly left us too soon, Colin had worn a lifetime of hats, and amassed a broad range of skills. Early in life he competed in alpine ski racing at Rotarun under the expert coaching of his father Phil. Colin raced with his younger brother Nick and all the other kids in the early days of The Hailey Ski Team. Colin soon became a formidable opponent in nordic skiing with the Sun Valley Ski Education Foundation; his “heel wagging” skills transferred nicely to telemark skiing (free the heel, free the mind). Colin was an expert who absolutely delighted in his time on the snow. Teaching his daughter Alexandra at Soldier Mountain in Fairfield was an especially poignant time to share his mountain love, just like his father before him did.

Fascinated with vintage aircraft and other scale models, Colin had an extraordinary attention to detail and perfected the art of creating tiny flaws in the finishes that mimicked real life dirt and wear. He even used to heat a needle to melt perfect little bullet holes in the sides of his war-torn fighter planes! We honestly though he would end up a set designer… he would have crushed it!

Colin also had a deep affection for vintage VW buses. In his green and white beauty dubbed Kermit, of course adorned with an “It’s not easy being green!” sticker, Colin traveled many parts of the west coast trying to live the “Van Life.” That was before it was cool, we might add. Perhaps there were a few breakdowns along the way, but maybe that’s a story for another time…

Colin’s many other skills included time as a hunter, amateur mycologist (wild mushrooms), fisherman, wildland firefighter, structural firefighter, EMT, community service officer, furniture finisher, and most recently as an upholsterer (again, detail). He also gave back to his community with his time on Blaine County Search and Rescue, Camas County Ambulance, and Fairfield Fire Departments. During his short construction career, he was working as a laborer on a job where his father was the superintendent. One day, bored with the lull between tasks, Colin discovered that the survey level was an excellent telescope and from this elevated site he had a great view over the mountains. As Colin was dreaming of future hikes, his father came around the corner and made it clear that gazing off into the distance was not exactly part of his job description, probably with some colorful language.

Colin eventually gave in to domestication and married Megan Shenk in Ketchum Idaho and soon their family included two beautiful daughters, Alexandra and Annabelle. They settled in Fairfield, Idaho, and later moved to Japan for several years with new job opportunities and fresh adventures. Colin deeply cared for his daughters and family and never missed a chance to explore new areas, usually taking one of the kids along. These trips would always include many stops explaining the minute details of a bug, mushroom or rock which caught his eye.

Colin is survived by his former wife Megan of Oceanside, California and their two daughters Alexandra and Annabelle Stelma; his brother Nick Stelma (Laura) of Hailey, Idaho; his mother Evan Lister Stelma and stepfather Bart Lassman; his father Phil Stelma and grandmother Phyllis Stelma; all of Bellevue, Idaho. He is also survived by his aunt Glenda (Matt) Ryan of Underwood, Washington; uncle Don (Deb) Stelma of Bend, Oregon; uncle Dan (Chelsea) Stelma of Underwood, Washington; and uncle David Lister of Sun Valley, Idaho. He also leaves behind his partner Toni Marie and countless other friends from his journey through life. He was preceded in passing by his maternal grandparents, John Lister and Ellie Lister; paternal grandfather, Glenn Stelma, and brother Alexander Stelma.

In lieu of flowers, the family asks that you consider a gift in memory of Colin to the Wood River Land Trust toward the Croy Canyon Preserve Campaign or the charity of your choice to help preserve the wild lands and rivers he so loved.

A celebration of Colin’s life will be held this summer when the weather warms, the mushrooms pop, and the trout rise.
To order memorial trees or send flowers to the family in memory of James C. "Colin" Stelma, please visit our flower store.