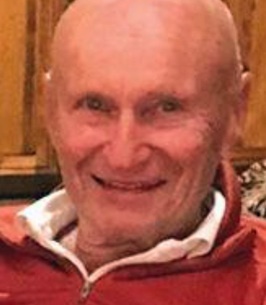 James Walter Sedin passed peacefully on February 23, 2021 at age 90 in his home in Ketchum, Idaho, after a short illness.

Jim was born in St. Paul, Minn., on June 25, 1930 to Walter Sedin and Svea Davidson. He attended Johnson High School, a powerhouse of hockey, and in Jim’s senior year, they won the State Championship. Jim earned his B.S. in Physics from the University of Minnesota in 1951, where he also served as captain of the Golden Gophers hockey team. Jim was thrilled when his grandson, Will, followed in his footsteps to attend University of Minnesota in 2020.

At 21 years old, Jim was selected as the youngest member to join the U.S. Olympic hockey team in 1952. The team played for two months throughout Europe in preparation for the Olympics. During the final game against Canada in Oslo, Norway, Jim scored the game-tying goal, securing Team USA's second place podium spot and a silver medal. It was a memorable moment for him and was a highlight of the day when anyone asked him about the Olympics!

Jim continued on to earn his Ph.D. in Electrical Engineering and Physics at Caltech on a Hughes Fellowship in 1958. Following graduation from Caltech, Jim joined startup, Watkins Johnson, in Palo Alto in 1959 where he was the Manager of High Power Microwave Tubes. Years later, Jim started his own computer peripheral company, Ryka Scientific, which was later sold to Varian Medical Systems in 1972. In about 1975, Jim was asked to serve as CEO of Mountain Computer in Cupertino, Calif., and continued in that role for 16 years until his retirement. He was also an accomplished pilot and frequently flew to Sun Valley from San Jose before moving full time to Ketchum in 2002. He loved living in Ketchum with skiing, golfing, and hunting easily available.

Jim's discipline for work and health is a strong memory for his kids, who remember finding him doing push ups and sit ups in between using his slide rule for a project he had brought home for work in the 1970’s.

Despite his many accomplishments, no position was more important to him than his role as a husband and father. Jim met his wife, Mary Louise, of Half Moon Bay, in 1960, and they married on December 27, 1965 in Reno, Nev. and were happily married for 55 years. Together they raised five children, Brad, Joseph, Andrea, Elisabeth and Stephanie. The only thing Jim loved more than dessert & skiing was his family. He will be remembered as a great dad, husband & friend.

One fond memory of Jim's dedication to his family was loading all five kids in the Travelall for ski trips to Squaw Valley at 4:30 am. In the middle of coordinating tickets and adjusting skis, Jim would be lucky to get one full run in by himself at the end of the day. He loved it all!

At 85 years old, Jim was finally able to get in as much Nordic skiing as he wanted, uninterrupted, on his homemade backyard cross country ski track.

His humility, generosity, honesty, kindness and quiet confidence were his trademark qualities known by everyone he met. His discipline and drive serve as everlasting examples for the generations after him.

Jim is survived by his wife, Mary Louise; sons Brad (Carla) and Joseph (Brenda); daughters Andrea, Elisabeth and Stephanie Durran (Dave); grandchildren Rachel, Jacquelyn, Samson, Robert, Marielle, Will and Alex; four great grandchildren and many friends, who will always be inspired by his legacy and love.

A memorial will be planned later in the spring. For those wishing to remember Jim with a memorial contribution, the Hospice and Palliative Care of the Wood River Valley or The Advocates in Hailey, Idaho ,or a charity of your choice are suggested.

A Memorial Page for Jim is available at woodriverchapel.com to share a memory or photo.
To order memorial trees or send flowers to the family in memory of James Walter Sedin, please visit our flower store.