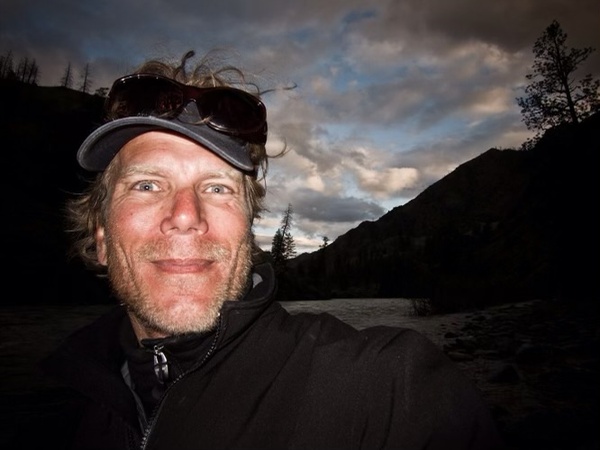 “In the midst of tears, I found there was, within me, an invincible smile.” – Albert Camus, shared to FB by Jim in early 2021

“Let the world touch your heart every day, and even in the smallest of ways. It will shift the balance of your life toward happiness.” – Jim Grossman

JAMES (JIMMY) SPENCER GROSSMAN 1966-2022 Age 56 Resident of Ketchum, Idaho Survived by his wife, Shannon; his children, Buey and Saba, and their mother, Pirie; his parents, Sam and Peggy; his brother, John and sister-in-law, Ginna; his sister, Courtney; and his Uncle Teddy.

For those of us who loved him (or were standing anywhere near him!) Jimmy was bigger than life. His freewheeling spirit, knack for conjuring adventure, and mach speed energy left us in awe and wanting to come along for the ride. In addition to being our wildest adventure buddy, craftiest coconspirator, and most jovial partner in crime, Jim was a one of a kind and masterful outdoorsman, waterman, photographer, conservationist, philanthropist, town-founding visionary, teacher, father, son, brother, and husband. Above all, he was a man with a ton of heart who inspired us to be more open and free every day.

As a close friend of the family’s put it, Jim had so much to give and he gave it. Again and again. He was always alert to who needed a lift, a word, an encouraging smile, or a pep talk. From his famous backward ski lessons, to extraordinary feats of foiling and surfing at the lake and in the ocean, to his dedicated work in conservation, to never letting a chairlift ride go to waste (sharpening your skis on the way up, for one example), Jim was full of love, playfulness, generosity, and gratitude. He continually surprised his friends, jumping in out of nowhere to raise the fun factor, or just to pick up the good vibe, and to remind people how thrilling and thoughtful life can be – all while flashing that movie star smile.

Our passionate Jimmy left this earth on May 30, 2022 during his annual pilgrimage to one of his most beloved and sacred places: the South Fork of the Salmon River.

Jim was born in Santa Monica, CA on February 15th 1966. Under his father’s wing, he became an avid surfer, kayaker, skier, and a beloved member of every community he joined.

Listing Jim’s athletic accomplishments is like unfurling an endless scroll. There are simply too many to name.

In his early years as a competitor, Jim skied for the Sun Valley Ski Team, won the 1980 National Junior Olympic Slalom Championship, and earned his place on the US Ski Development Team as well as the Colorado College Ski Team where he was a two-time All American. As a kayaker, he was a Stanley Whitewater Rodeo Champion twice-over — winning the title in 1983 and again in 1984. He went on to win the same title in 5 different events in Buena Vista, Colorado; in Durango, Colorado; and in Salmon, Idaho. That was only the beginning. Jim’s athletic accomplishments also include the Surf Kayaking World Championship, which he won multiple times over. A National Champion in paragliding, he and Will Gadd were the first to paraglide across the United States. At some point between all the kayaking, skiing, paragliding, and accolades, Jim also took 2nd place in the US Snowboarding Nationals.

As an international sportsman, Jim completed the first ever descent of a crocodileinfested river through Papua New Guinea in the fall of 1987, and due to some last minute turn of events, he ended up doing it solo. While at home in Idaho, his decadeslong presence on the North Fork of the Payette redefined what was possible in Class V kayaking. For example, he hand paddled the North Fork top to bottom… just for fun and multiple times.

His dear friend, Gerry Moffatt, put it so well: “Jim never shied away from leaning forward to touch the lightning - which for all of us who knew him, made him exciting, exasperating, and inspiring all at the same time.”

After graduating from Colorado College in 1989 with a B.S. in Political Science, Jim joined Grossman Company Properties and served as Vice President of commercial leasing. After first basing in Phoenix, he moved to Boise, Idaho in 1995 and started work on Hidden Springs, an award-winning master planned development.

As President of Hidden Springs, Jim planned, entitled, and developed the SchickOstolasa farmstead in the foothills of Boise into a new rural community in the tradition of Idaho’s small towns. The property included 848 home sites, public and private schools, and 800 acres of open land and commercial buildings. He also founded Elementary Charter School in the old farmstead, now known as Riverton International School. As part of the Boise School District, the school now serves more than 500 students. In 2000, Jim’s vision and efforts were recognized when Hidden Springs received the prestigious Best Smart Growth Award from the National Association of Home Builders. As always, Jim’s vision for the future was ahead of its time and ever aimed at making things better for the people and places around him.

After completing Hidden Springs, Jim devoted himself to charitable work. He served as President of the Grossman Family Foundation, as a member of Grossman Company Property’s Advisory Board, and as trustee of Boise State’s Frank Church Institute and of Sun Valley Adaptive Sports. Inspired by his sister, Courtney, Jim also served as the Chairman of the 2009 Special Olympics World Winter Games in Boise, Idaho.

Jim was a talented teacher. Under his expert guidance, we, his friends and family learned that we could handle more than we ever thought we could. And he delighted in our successes. Jim put his love of education and teaching into action professionally, becoming one of the most sought after and iconic Sun Valley Ski Instructors in the modern era. He felt so uniquely at home on the hill, that on any given spring-time afternoon, Jim could be found sitting in the sun, shirtless with a yard sale of clothes and gear strewn around him at the base of Warm Springs – a fixture of the aprés scene.

Even with all of these and many more professional and athletic accomplishments, Jim considered his most important role to be that of husband to his beloved, Shannon, and father to his two amazing children: son, Buey and daughter, Saba.

Jimmy’s children were his everything – a fact that was clear to anyone who knew him. He couldn’t have been more proud of them nor more thrilled about being their dad. He deployed his superhuman strength and huge heart to simultaneously challenge and protect them every day. Buey and Saba were taught early and often to revere the natural world and to live with an “attitude of gratitude.” He made them the athletes they are today, cheering them on and documenting all along the way. He showed up to every event with his DSLR camera and giant lenses, ready to capture each and every action-packed moment – not only of Buey and Saba, but of every kid on their team… and on the opposing ones. He would upload these expert sports shots, along with gorgeously composed images of sunsets, sunrises, and the seasons passing in Sun Valley to his Facebook page. Thousands of them. We will always cherish seeing the world through Jim’s eyes.

Among the many, many treasures that Jim’s parents saved from his childhood, we found a school paper that Jim wrote titled, “Religion.” In it, Jim contemplates his place in the universe: “My parents took me down the Middle Fork of the Salmon for the first time when I was 8 years old,” he wrote. “It was the first of hundreds of trips on Idaho’s wonderful rivers. We camped out at night, and I looked up and I saw what I believed to be a million stars. Listening to the constant flow, the constant sound of the river, I learned to enjoy and protect what God has given us. And to give thanks, whether it’s for the beautiful snow capped peaks, the broad lush valleys, or the fabulous rivers where I’ve spent most of my life and an awful lot of Sundays. This is my religion. This is where I worship. This is what God means to me. Religion is very personal, and God is very personal. It means different things to different people, and the beauty of Idaho is what God means to me.”

Forever in our hearts. Forever in flow. We love you, Jim. Thanks to all of you who have loved him with us and always will.

Even in the midst of our tears, Jimmy Grossman’s legacy is the invincible smile in our hearts. —

There will be a Private Family Service. A Celebration of Life will be held on August 7th in Sun Valley, Idaho – invitations and details to follow.

lieu of flowers, Jim’s family asks that donations be sent to Idaho Rivers United and the Boise State Frank Church Institute. They also ask that Jimmy stories (everyone’s got one) be posted to Jim’s Facebook page for all to enjoy.