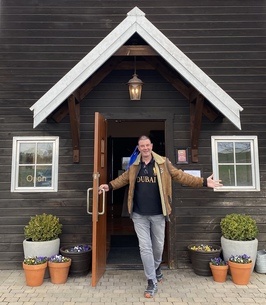 Ivan Seevens died suddenly on April 29, 2021 in the early afternoon. Having risen at 4 am he had traversed the valley, brought his wife a surprise pastry, had coffee with his friend Eric, went to several client meetings, and talked to multiple friends and business associates, and even his brother in the Netherlands just 15 minutes before suffering a heart attack while driving south. He was heading down to learn to process his first deer, which he “harvested” at 5:25 am when the car in front of him nailed it and he quickly put it in his car.

Ivan was one of the most generous souls; he was kind and loyal, funny and fun-loving. He didn’t take bull, and he didn’t give it; he loved to tease and joke around. A bon vivant, he didn’t believe in drinking cheap wine or liquor and he appreciated good food. He lived without regret and anything he took on, he took on 100%, with all his energy and focus and humor. Ivan was a great businessman and he always had numerous projects and plans in the works.

The most important thing to Ivan was family. His wife Ana was his “Amor”, the love of his life. They met on April 27, 1998 and fell in love by May. They had many adventures together starting in Brazil, emigrating to Miami, then finding their way to Sun Valley. Ivan would do anything for Ana. He was so proud of her embracing life in the US, learning English, and obtaining her massage certification. He loved to delight her. She fondly remembers his many sweet gestures like when he surprised her with chocolate and flowers and champagne at a beautiful hotel when they were visiting the Netherlands for Ivan's parents 50th anniversary. One of their favorite adventures was a belated honeymoon in the Maldives where they spend a magical 10 days together in paradise.

Ivan was so proud of his son Jan. They were very close, speaking and visiting often. Ivan enjoyed that Jan was pursuing his degree at Boise State where he was independent yet close to home. Ivan taught Jan the value of hard work and while he enjoyed spoiling Jan, he also insisted that Jan get a college degree and was looking forward to Jan working with him in construction this summer. He appreciated Jan’s passionate vibrancy and looked forward to watching him mature and thrive.

Ivan and Ana came to Sun Valley for many years before making it their home several years ago. Ivan loved the mountains and the people of the community, and he made friends wherever he went. He worked at the hospital, and then moved into his dream job as Project Manager with Mountainwood Construction, where he enjoyed and appreciated all his colleagues.

Ivan was fun-loving and always enjoyed a celebration. On holidays, you would find him surrounded by friends and family at his favorite restaurant, the Ram, with an Imperial of his favorite wine. On Sundays after church, he was a regular at the Konditorei. Wherever he went he made an impression and he made friends; he was one of a kind. Ivan loved to host at his home, and had a barbeque party planned for the next day. Ivan loved travel and was looking forward to being able to visit his parents and brother in the Netherlands when the flights opened up. He had more wine tasting and camping trips on the schedule. He will be deeply missed by all of us. We imagine you in heaven working on improvement projects and beefing up the heavenly wine collection!

To order memorial trees or send flowers to the family in memory of Ivan J. Seevens, please visit our flower store.