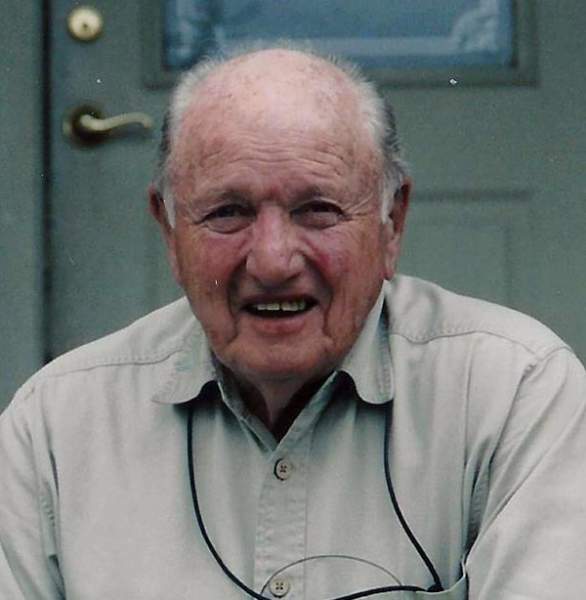 Graduated from Eastern High School in 1941. Bill worked as an apprentice machinist in the Washington Navy Yard graduating in October 1943. He volunteered to be drafted in the US Navy in 1943 and went into Naval training in (Millington) Memphis, TN and sent to Alameda, CA where he was an instructor for the rifle and pistol range along with other aviation ordnanceman duties.

While serving in the Navy at Alameda, Bill met and married Elva Marie Stolte who was also serving in the service. To that union was added two sons and a daughter – Eric William, Brian Lee, and Mary Helen. Bill and Elva were later divorced.

Bill was discharged from the Navy in Alameda, CA in October, 1946 as an Aviation Ordnanceman, Petty Officer 2nd Class. He returned to Washington, DC Navy yard where he again worked as a machinist and started a new career with Mountain Bell in 1949. He held the positions of telephone lineman, telephone installer, line assigner, sales representative, and manager. He was sent to Weiser, Idaho as a temporary manager in 1954 and later sent to Montpelier, Idaho as manager in 1955.

Bill met Carolyn Ipsen Bird who he married in Salt Lake City on July 31, 1965. Together with Carolyn and children, Janis and Steven, they moved to Boise, Idaho. Bill continued to work for Mountain Bell with duties in the rate and forecast area. In 1966, he and his new family moved to Hailey, Idaho as the telephone manager. A son, Scot Arthur was born in Sun Valley on 8-30-68.

Bill held many civic positions in Hailey and Blaine County from 1967 to 1984. He served as president of the Hailey Chamber of Commerce, president of the Rotary Club, appointed to the Blaine County Planning and Zoning commission, appointed to help form Hailey’s Planning and Zoning Commission and later to be one of its first members. Bill was elected and twice appointed to Hailey’s City Council. Bill retired from US West in December, 1983 as its last manager with more than 34 years of service.

To order memorial trees or send flowers to the family in memory of William House, please visit our flower store.