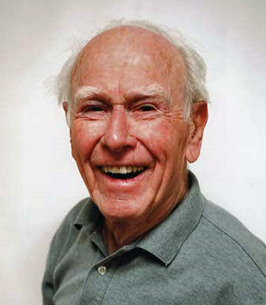 Cox enlisted in United States Marine Corps, November 10, 1942, joining “Seattle’s Own Platoon.” During World War Two his mother worked at Boeing and his father at Todd Shipyard. Cox saw combat during the Cape Gloucester Campaign on the island of New Britain and was wounded in the elbow by rifle fire. Hospitalized in New Guinea and Sidney, Australia where surgery was performed and Mare Island Hospital. Discharged July 1944 receiving the Purple Heart Medal.

Attended University of Washington 1944 through 1953 where he was a member of Phi Delta Theta Fraternity, receiving his B.S. in 1948 and DDS in 1953. At the time of graduation, Cox had been married seven years and was the father of Kathleen Diane Cox and Jeffry Morrow Cox. During those years, Cox worked as a Journeyman Carpenter, a painter, a meat market clerk and a variety of other jobs. Cox was one of the first WWII Veterans whose schooling was partially subsidized by the Veteran’s Administration’s Public Law 16. Cox has a third child, Bart Egan Cox with wife Billie Pollman. He was married to wife Tina Doto in 1974. Tina died in 2014. He has three grandchildren, and three great-grandchildren.

He maintained a private practice in downtown Seattle’s Medical-Dental Building from 1953 through 1994. His teaching positions at the dental school included clinical instructor in the departments of Endodontia, Periodontia, Oral Diagnostics and Treatment Planning. He served as guest lecturer in the auxiliary Dental Personnel Program.

For 30 years, Cox has been a member of Seattle’s Practice Management and for 36 years a member of the Seattle Crown and Bridge Study Club. He is also a life member of the Seattle King County Dental Society, where he has served in several capacities. He is also co-founder and past president of the U of W School of Dentistry Alumni Association.. He has held several terms as trustee at Washington Dental Service Corp. He has also been a facilitator for W.D.S. delivering the Pacific Institute Course, “Investment in Excellence.” He was also a member of Delta Sigma Delta Dental Fraternity.

His hobby interests were varied and extreme. Trapshooting held top interest several years ago resulting in class titles including State A champion in Olympic-type trap. He qualified for three international trials and participated in the 1964 Olympic tryout finals. Skiing is a continuing activity which afforded time with family including his three grandchildren. Photography has been a longtime pursuit with Eddie Bauer Company purchasing and selling prints of outdoor scenes. Patients enjoyed the photo gallery character of his dental office which reflected hobby interests and travel. Scuba diving was another hobby. Cox was introduced to motorcycling by his son Bart was ten at the time. Cox joined a motorcycle gang a year later, at the age of 50, The Molar Rollers. This is a group o dentists who enjoyed sport touring and have traveled most of the United States with trips into Mexico and Canada. For two seasons he participated in organized motorcycle racing. This was Grand Prix-type closed circuit racing. While it was the most demanding and exciting of all his hobbies, Cox decided to stop racing due to “running out of body parts.”

Mountain climbing takes second place in risk exposure. His accomplishments include four ascents of Mount Rainier (14, 410), twice with his daughter and once with his son-in-law, two failed attempts on Canada’s highest peak, second to Mt. McKinley in North America, Mount Logan. A storm stopped his attempt on Europe's highest mountain, Mt. Elbrus in the southern Georgia province of then U.S.S.R. Two weeks later, he summited Africa’s highest summit, Mt. Kilimanjaro (19,340). He accomplished this shortly after his 65th birthday.

Cox had mixed emotions about retiring from dentistry: “I loved my patients, and being of service to them has been personally rewarding. I will miss their association.”

Writing was another interest in which he achieved recognition. While prepariing for retirement and shortly thereafter, he wrote several articles on retirement and intraoffice communication which were published in professional journals. During the five years he lived with wife Tina in Sedona, Arizona post retirement he had fun writing monthly tongue in cheek articles in Sedona Eccentric relating mostly to extra terrestrial beings on anything else credulous.

Because of his wife, Tina’s failing health they moved to Laguna Hills, CA in 2000. Tina passed away in 2014 on Mercer Island, WA in memory care.

Herschel Lived in Sun Valley, ID and skied every season until he was 93 years old. He was a longtime member of the Ancient Skiers Association.

Herschel is survived by: Daughter Kathleen Cox Miller (Dudley), grandson Brady Morrow Miller (Megan) 2 great-grandsons Peter and Russell, granddaughter Lauren Miller Bell (Greg) great-grandson Oliver, son Jeffrey Morrow Cox, granddaughter Claire Cox (Andrew), and son Bart Egan Cox (Melinda).
The family is so grateful to Anita and the loving staff at Silver Creek, Hailey, Idaho. We are forever thankful for Keith Potter, his trainer and friend in life. We are grateful for all friends of Herschel Cox who loved him dearly. He was certainly one of the most colorful people any of us will ever know. We hope you may join us at one (or both!) celebrations of a person who lived to the max.

In lieu of sending flowers, and because of his love for the Marines and young people, please visit the Club Beyond website www.mcym.org if you wish to remember him with a gift.
With love,
His thankful family.

To order memorial trees or send flowers to the family in memory of Herschel Albert Cox Jr., please visit our flower store.