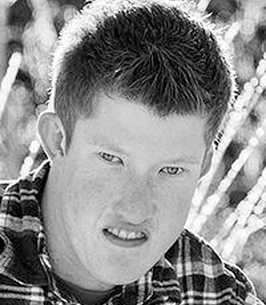 Gavin James McDonald, big-hearted mountain man and rancher, passed away Sept. 13, 2020, at the age of 23 after a long and hard-fought battle with cancer. He left us peacefully, in his mom’s arms with his sister holding his hand.

Born in Boise, Idaho, on Jan. 14, 1997, he was an Idaho boy through and through. From his earliest days he was drawn to nature, animals and life outdoors. Gavin was a happy, curious and loving child with a head full of blonde curls and blue eyes. When his parents moved back to their hometown of Ketchum he built close friendships and was adored (spoiled) by all three sets of grandparents.

Gavin loved animals. He watched countless nature documentaries and was a huge fan of both Steve Erwin and David Attenborough. He could mimic any animal and spent hours playing with his sister and cousin embodying them all, especially dinosaurs and meerkats. Gavin had an amazing connection with all creatures and loved his pets. From the leopard geckos he bred and raised as a boy, the horses he rode in the backcountry or the herd of black angus cattle he ran along the Salmon River and Rock Creek canyon south of Kimberly—he treasured and tamed them all. He especially loved his dogs, taking them hiking or duck hunting on the Snake River—you could always catch him sneaking them treats and secretly letting them up on his bed. As a member of Blaine County 4-H, he showed his cattle every August at the fair, winning Reserve Grand Champion several times and Grand Champion in 2016.

Since the beginning, he had a limitless imagination and a natural talent with a pencil and paper. His sister remembers sitting next to him at Desperado’s, his favorite restaurant where they knew his order by heart. While waiting for a burrito bigger than his head (which he always finished), she would watch him draw the most detailed, realistic animals. From little reptiles to dragons breathing fire, he never copied anything, he just used his memory, imagination and a few old crayons, bringing beasts to life.

He attended Hemingway Elementary, WRMS, WRHS and CSI. As a young man, Gavin joined the Mormon Church where he found great comfort, guidance and friendship. He worked summers at Papa Brunee’s in Stanley, making pizzas and eating calzones. Above all, he was a rancher. He learned much from his dad and family friends, but his cowboy hero was his grandpa–the strongest guy he knew, Gavin’s most patient mentor and best friend. From the miserable, dark and freezing winter mornings to the excitement of spring calving or moving the herd south in the fall, he loved those animals and the life it offered.

Gavin had a mischievous giggle and an adventurous spirit with the heart and soul of a gentleman cowboy. No one could mix a better country playlist. Quick to offer a helping hand or share a story about cows, Gavin was a friend you could count on. He was always ready to pick up a buddy or four and hit a back road in his truck, often with the bed full of old pallets for a bonfire. Other nights you’d find him heading out to a hot spring or towing a buddy out of a ditch or snowbank—sometimes, vice versa.

Being outdoors in nature was where he was most himself. Rolling in the surf and free diving in the reefs of Maui or snorkeling in his grandpa’s creek hunting crayfish, he could spend a whole day exploring that hidden world. He found solace paddling his kayak on a glassy mountain lake and spent many a day at Redfish, getting thrashed like a bronc rider on the tube behind his dad’s boat. His idea of a dream vacation was floating the Middle Fork or bird hunting with his grandpa in Mexico. He loved fishing at his aunt and uncle’s lake and hitting the streams up north. He was proud to call Stanley home, hiking and exploring all the wild parts or driving the ranger across the alpine grass pastures, checking fence and cattle all summer. He spent his falls deer and elk hunting—and the rest of the year talking about it.

Gavin was survived by his parents, Rain and David; little sisters, Makena and Savanna; grandparents, John McDonald, Lynn and Gary Hino and Anny Zweifel; aunt Aara Zweifel, uncle, Johnny McDonald, and aunt Michelle Choate; 10 great-aunts and uncles, including Jeannie Sligar-Shakstad, Jackie McDonald and Robbie Freund; plus many cousins, especially Kagen Albright, who was a true brother to him. He was preceded in death by his beloved Meema Lois McDonald, great-aunt Patti Williams and grandpa Craig Zweifel.

Funeral Services to be held on the lawn at the Sawtooth Chapel on Sunday, Sept. 27, at high noon in Stanley, Idaho. After, he will be buried in the Stanley Cemetery—the family would like to thank the generosity of Brett Woolley for making this possible. A celebration of Gavin’s young life will follow in the pasture of the family’s Stanley home at 760 Valley Way/Sawtooth Terra Tracks Road. A memorial scholarship has been made in Gavin’s honor to benefit Blaine County 4-H members in pursuit of their educational ambitions following high school. Contributions can be sent to Ketchum American Legion Post 115/Gavin McDonald Scholarship Fund, Box 625, Ketchum, ID 83340.
To order memorial trees or send flowers to the family in memory of Gavin James McDonald, please visit our flower store.