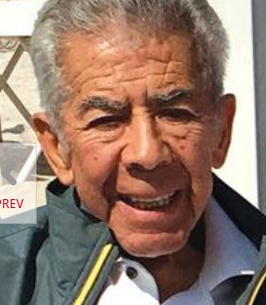 Frank was the best husband and father ever! He had a wonderful sense of humor and positive attitude. He loved entertaining people with his numerous travel stories. Loosely titled “Stranded in the Jungle,” these accounts took him back through a life of love, dedication and exploration with his best friend and wife of 57 years, June.

Frank and June first met over poolside drinks and instantly bonded in 1961 while on spring break at the Riviera Hotel in Palm Springs, California. Frank’s family nicknamed him “Babe” at a very young age, and he is still Babe to all family and friends. His life journey began in Los Angeles in the spring of 1932 where his parents, Francisco and Beatrice, had a large loving family, including his sisters Marty, Corky, Grace and Celia, and his brother, Danny.

He began working at age 8 selling programs in the Los Angeles Coliseum and enjoyed every minute. Babe was drafted into the Pittsburg Pirates straight out of high school and played professional baseball as a left-handed pitcher in Los Angeles, California; Monterey, Mexico; and Eugene, Oregon. About age 20, he was drafted into the Army and became the head baseball coach for the entire military camp in Mainz, Germany, with a great deal of success, winning most of their games. After his service, he went to Cal State, Los Angeles and graduated with a degree in teaching, which lead to a baseball and basketball coaching career in Los Angeles city schools for 32 years. Along with coaching, he and June began remodeling and selling homes in Pasadena and then continued on after moving to Ketchum. Their son Brandon, born in 1971, grew into a skilled carpenter and came to the aid of his folks whenever needed. Overseeing his son swing a hammer was just one of the many satisfactions Frank found in being “the best ever” father.

Travel was Babe’s big thing, and it went well with his passion for downhill skiing. The couple honeymooned in Squaw Valley, California, the year after it hosted the Olympics, but it was the grandeur of the Alps that always beckoned. Abetted by June, Frank turned every bit of his time off work into an opportunity for getting to know skiing and Europe better. His favorite ski destinations were Zermatt, St. Anton and Garmisch, Germany. In later years, accompanied by their son Brandon, they got away to Venice, Prague, Athens, Barcelona, Nice and many other European cities and countries to soak up the culture, especially the food. Frequent returns to their roots and many friends in California were always on their itinerary, often as a jumping off place on the way to Europe.

Frank’s long life was full, charmed and beautiful, and it ended just as he would have it, literally in the arms of June and Brandon. True to his character, he would not complain that it ended short of his 90th birthday. He would instead express appreciation for all the fun, laughter and camaraderie he has enjoyed every step of the way. A celebration of his life will be held at his home, in Ketchum from 1-4 p.m., Sunday, Oct. 10, 2021. We hope those who knew him will be able to come over for a final farewell to a beloved man.

To order memorial trees or send flowers to the family in memory of Frank Ornelas, please visit our flower store.