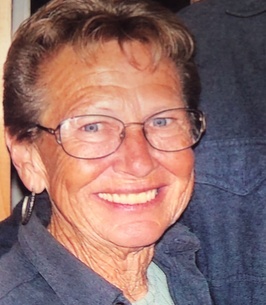 Elaine was born in Bowdle, South Dakota to Ernest and Hulda Haar.

Bill and Elaine met at school where he was known for driving cars too fast and she was homecoming queen. One night he asked to hold her hand at a party and he has been holding her hand ever since. The two love birds married on April 11, 1964 and moved to Idaho in 1966 to be near Elaine’s parents and the mountains.

Bill and Elaine had four children and in 1975 they moved to Bellevue with Grandma Haar where they continued to establish the family business, played active roles in the Labor Day celebrations and later maintained the Bellevue Cemetery. After years of service Bill and Elaine were inducted into the Sawtooth Snowmobile Club Hall of Fame in 1984. When the time came, they hung up their snow shovels and headed to Arizona with their good friends Pat and Faye Barker and Roy Burr for warmer weather and beautiful sunsets. Elaine enjoyed sunshine in the day, nights by the campfire and having company visit to see the decorated desert.

If our kitchen table could talk, it would tell you that Elaine was the shining light of our village. She loved having family and friends over filling the house with laughter, slow dancing with Bill in the kitchen, having a Friday on the back deck and brownies ready for the grandkids. Her front door was always open. You may have entered as a stranger but you would get a famous hug just the same and would leave as a friend.

Elaine’s favorite song was I Hope you Dance. Give the heavens above more than just a passing glance, and when you get the choice to sit it out or dance….. I hope you dance.

She peacefully passed in her sleep next to the love of her life of 57 years, Bill Karst. She is also survived by her children Don (Kelly) Karst of Bellevue, Dale (Linda) Karst of Caldwell, Dan (Cindy) Karst of Bellevue and Darla (Ed) Schrock of Boise. Her grandchildren Karissa (Nicole) Schrock of Meridian, Niky Robles of Boise, Matt (Olesea) Schrock of Tacoma, Giovonni Rodriguez of Caldwell, Tasha (Lenny) Millward of Boise, Amanda (Frank) Suwanrit of Bellevue, Jessie (Ryker) Brady of Kuna, Ashley (Keifer) Klauser of Twin Falls, Mihaela Karst of Boise, Sebastian Morford of Boise, Devin Karst of Moscow and eight great grandchildren as well as hundreds who called her Ma Karst (not Mrs. Karst) and Grandma.

I LOVE YOU MORE and don't do anything I wouldn't do.
To order memorial trees or send flowers to the family in memory of Elaine Karst (Haar), please visit our flower store.