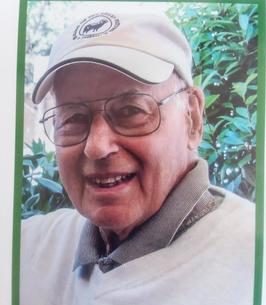 Ed Weil died on March 18th at the age of 90 after a brief hospital stay. Ed always approached life with a glass ‘half-full’ attitude, which carried him through the challenges of his last years. He was born in November 1929 into an uncertain and volatile world, as today we again face a time of unraveling.

Ed grew up with his parents Katherine and Edward and older sister Babette in Highland Park, IL until he was 7 years old. His parents then purchased a 227-acre farm in Mundelein, IL, which he looked back on as a change that shaped his entire outlook on life. In his personal memoir, he wrote “I progressed from a child to a young man who knew the importance of work, discipline and perseverance. On a farm, things don’t get done unless you do them. That is a valuable lesson for anyone to learn.”

Ed attended Wharton at the University of Pennsylvania for 2 years, and then after hitchhiking with a friend across the country, enrolled in Stanford University, graduating in the Class of ‘51. After graduation, he enlisted in the Army and served on a base in South Korea during the Korean War.

Ed met Julie on a blind date when she was a sophomore at Northwestern University, and they were married during her junior year on March 2, 1958. Ed and Julie loved to refer to each other as ‘best friends’ and just recently celebrated their 62nd wedding anniversary. They first settled in Highland Park, IL, and then moved to Andover, MA in 1967.

Ed’s professional career was a book with many chapters. He started in the retail business, working at Sears Roebuck and other retailers, spent 3 years as the Business Manager of the Andover Public Schools, and was Vice President of Protective Materials, a company which made bullet proof vests and armored cars. He finally turned his hobby of investing in the stock market into a career, and worked as a stockbroker from the age of 50 until his retirement at 72 years of age.

Ed loved to play sports – including skiing, volleyball, tennis, bike riding, fishing and golf -- and coached his children’s Little League and basketball teams. He was an avid reader and an encyclopedic source of information. He valued the teachings of Judaism and taught Sunday School for over 25 years. And, he loved the outdoors and global traveling with Julie and introduced his family to the joys of the mountains in Sun Valley, ID.

There will be a graveside service at the Ketchum Cemetery in Idaho for close family members only. Donations in his honor can be directed to Mazon: A Jewish Response to Hunger, the National Kidney Foundation, or a local charity addressing community needs in this time of stress.

May Ed's memory be for a blessing.

To order memorial trees or send flowers to the family in memory of Edward Arthur "Ed" Weil, please visit our flower store.