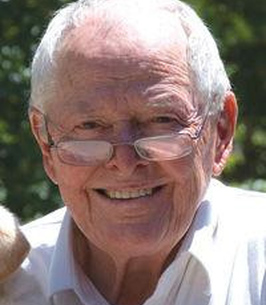 Edmund Wattis Dumke, 93, died peacefully in his home on Feb. 10, 2019, of complications from Parkinson’s disease.

Born Jan. 25, 1926, in Ogden, Utah, Ed was the youngest son of Dr. Ezekiel Ricker Dumke and Edna Wattis Dumke. Ed graduated from New Mexico Military Academy and shortly thereafter joined the U.S. Navy. He served as a tail gunner based on the USS Langley and USS Prince William in the Pacific in 1945. After the war, Ed returned to Utah and graduated from the University of Utah in business. Ed received a master’s degree in business administration from Columbia University.

Ed became a stockbroker in Salt Lake City and helped finance the uranium mining industry in Utah in the 1950s. He became a member of the New York Stock Exchange while working on Wall Street in the early 1960s. Later, Ed began working manufacturing composite and fiberglass products, including the first fiberglass skis for Dura-Fiber, golf shafts for Head and vaulting poles for Browning.

Ed married his hometown sweetheart, Mary Carol Dean Browning, on Sept. 12, 1950. Together they had four children. He is survived by his wife of 68 years and his children, Sun Valley residents Michelle Dumke Praggastis and Edmund Ezekiel Dumke, and La Jolla resident Andrew Browning Dumke; nine grandchildren; and seven great-grandchildren. His eldest daughter, Valerie Ann Dumke, predeceased him in 2007.

Ed was a passionate sportsman and outdoorsman. He loved golf, horseback riding, fishing, skiing, hunting, boating and flying. If he wasn’t doing any of those activities, he was talking about them, always enjoying coming up with new ideas for competitions and adventures.

Many local charities have been touched by the Dumke family’s support. Individually, and together with his family and family foundation, Ed supported many charitable organizations and causes throughout the Intermountain West.

The family has given memorial gifts to the Hospice of the Wood River Valley, The Community Library, St. Luke’s Wood River Medical Center and the Moran Eye Center at the University of Utah. In lieu of flowers or gifts, the family requests your support be directed in his honor to one of those charities.

Ed’s services will be private and held at a later date.
To order memorial trees or send flowers to the family in memory of Ed Dumke, please visit our flower store.

Ed&rsquo;s services will be private and held at a later date.