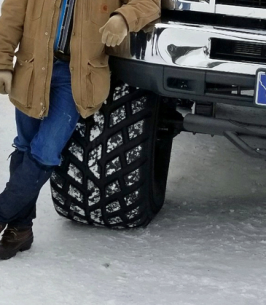 Del Lee Oveson, 45, of the Stanley Basin, Idaho, returned home unexpectedly to his Heavenly Father on September 3, 2019. He was born on Easter Sunday, April 14, 1974 in Provo, UT to Dave Lee and Margaret Oveson of Castle Dale, Utah.

He was raised in Castle Dale, UT with his four siblings. In his youth he participated in rodeo, 4H, and boy scouts. The family later moved to Idaho and he graduated from Valley High School in Hazelton, ID in 1992 where he enjoyed playing football, basketball, running track, and his technical classes. He competed in speech and debate and was involved in student government. He graduated from the College of Southern Idaho in the field of agriculture.

Del married Margaret Harvie of Challis, ID on Oct. 2, 1999. They have two children, Kylee Mae and Logan Dave. They were sealed in the Idaho Falls Temple on Feb. 15, 2001. They made their home at BusterBack Ranch in the Stanley Basin.

Del came to the Stanley Basin in 1995 where he was employed by the Henslee’s at Salmon Falls Land and Livestock. Over the 25 years they worked together they became fast friends and part of the family. Del loved the Stanley Basin valley and the people in it, and they loved and respected him. Del was a man of his word and was absolutely reliable and was the type of person who would drop everything to help. Some unique characteristics he will be particularly remembered by were his quick wit and his dry sense of humor. He offered wisdom, guidance, and advice to many; you would always leave a better person after spending time with Del. He taught his children by example the values of hard work, honesty, and integrity.

His family was not only the most important thing in his life, but they were lucky enough to also be part of the work crew on the ranch. Del hosted a large New Year’s Eve fireworks show every year. The family and valley will miss that tradition.

He was a member of the Church of Jesus Christ of Latter-day Saints. He served in nearly every calling, and was currently serving in the branch presidency at the time of his passing. He truly loved working with the single adults.

Del is survived by his wife and two children, as well as his parents of Lamont, ID and his siblings Dave (Janae) Oveson, Stephanie Van Dyke, Stacie (Darin) Thompson, and Summerlyn (Greg) Blackburn.

Please join family and friends at a funeral service honoring Del’s life on Saturday, September 7, 2019 at the Church of Jesus Christ of Latter-day Saints Chapel in Challis, Idaho. Visiting with family will be from 11:00 am – 12:00, with the funeral service beginning at 12:00.

Stories, memories, experiences, or antidotes about your time with Del would be appreciated by the family if you would be willing to write them down and share them with his wife and children.
To order memorial trees or send flowers to the family in memory of Del Lee Oveson, please visit our flower store.