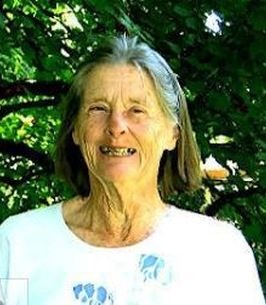 Born in Petaluma, California, on Dec. 15, 1935, to Richard Finley and Zelma (George) Finley, Carol was the first of four children, followed by Bernice (Bernie), Ruth and George.

Carol grew up in Northern California, including the communities of Calistoga, Point Reyes Station, Hastings and Rodeo. She attended Humboldt University, receiving a Bachelor of Science degree in Wildlife Management in 1959, one of the program’s first female graduates.

After receiving her degree, Carol worked on various governmental wildlife studies, and was also an avid outdoorswoman, traveling to Austria for mountaineering trips, hiking and rock climbing with the Sierra Club, and working with the Student Conservation Association in Teton National Park. Here she met Frederick Arlin Blackburn, a Washington, D.C., native, former Navy cartographer and fellow conservationist, whom she married in 1967 in Moose, Wyoming. Two children followed, William (1969) and Anne (1972).

Carol and Fred spent the early years of their marriage as snowbirds traveling between the Southwest in the winters and the Jackson Hole, Wyoming, area in the summers. During this time Fred worked as a park ranger at Teton National Park, and they resided in a two-room log cabin at the Bar BC Ranch, an historic dude ranch grandfathered into the park when it was founded in 1929. During their time in Jackson Hole, Carol and Fred became deeply connected with Mardy and Olaus Murie, founders of the Wilderness Society, and the conservation community that surrounded them, a conviction that Carol pursued for the remainder of her life.

Growing children eventually put an end to the snowbird life, and the family settled in Hailey, Idaho, in 1979. Raising two children certainly took her attention, but she also began her career as a gardener, found time to quilt, weave, and teach herself natural plant dyeing, and continued to explore the valley and surrounding area with family and friends.

An outstanding master gardener, Carol was widely sought after for her horticultural wisdom in planning and maintaining many types of high-altitude gardens. She earned an enviable reputation as a specialist in native plants, rare plants, and invasive species; conducting numerous botanical surveys for The Nature Conservancy, Bureau of Land Management, Wood River Land Trust, and other federal and private entities. She also served for many years on the local Watershed Advisory Group.

Carol was the Horticultural Specialist for the Sawtooth Botanical Garden for more than a decade, creating Carol’s Wildflower Garden from seeds she collected during hikes and serving as a key advisor on the Site Committee.

She also helped found the Wood River Chapter of the Idaho Native Plant Society in the late 1980s, leading numerous field trips and serving as an officer in many capacities until her retirement.

In 1995, Carol obtained a second bachelor's degree in Landscape Horticulture at the University of Idaho at the age of 60, and put that to good use with all of her projects, small and large, for the rest of her life.

Friends and family remember her as a fiercely independent thinker, avid outdoorswoman, voracious reader and researcher, textiles artist and collector, and a passionate advocate and tour guide for the land she knew and loved so well.

She was a generous friend to many, dropping off a slice of especially tasty cake fresh from the oven, a potted plant or an article she had just read, providing a safe haven for many a stray cat and migrating songbird, and was renowned for her hand-written notes to friends near and far.

She is survived by her son, Will (Fulda, Germany), and his wife, Verena; her daughter, Anne (Portland, Oregon); her sister, Bernie (La Pine, Oregon); a grandson, Kevin Blackburn (Germany); as well as a large and affectionate collection of Finley cousins.

A celebration of life will be held at the Upper Big Wood River Grange in Hailey on Saturday, Dec. 11, from 1-3 p.m.

In lieu of gifts or flowers, please consider a supporting gift to the Wood River Chapter of the Idaho Native Plants Society in her memory.
To order memorial trees or send flowers to the family in memory of Carol Eiliene Blackburn, please visit our flower store.