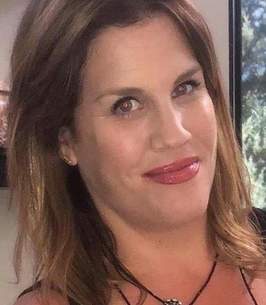 Candice Rosenberg Populus (Candy Jr), was born in Seattle Washington where her heart will always lie. She was a Seattle girl forever. She loved her Huskies and Seahawks just like her father, Leslie who passed away from Covid this April. Candy attended the Bush School and again followed in her father’s footsteps by attending Franklin High School. She had wild quick stint at UNLV, and then settled into Real Estate for several years before finding her passion as a para educator. Her doting grandparents, Maxine and Herman Blumenthal instilled in her a sense of obligation to Seattle philanthropy. She loved to work with Poncho for the arts and was involved in ARCS (Achievement Rewards of College Scientists), that her grandmother was a founding member of.

In 2005, Candy married Ernest Populus in Maui, HI. Together they had one son Ernest Gabriel (Gabe). They divorced, but still held the most love for each other and their beloved son.
Although she lived and breathed football, her son was her world, who she hopes will be a football player someday. She is so proud of her “gentle giant.” She loved to bring him to Sun Valley and watch him ski and find a love for nature as well as spend time with her adoring sister, Brandelyn Maxine Rosenberg (Brandy).

Candice who was known as Candy Jr., little Cand, Sissy, Junior, CJ, was full of life and fun. She loved her family and cared about tradition and family legacy. She was tall and beautiful with the softest skin, she was born with lips to die for and loved to lather them with lip gloss. She was passionate, protective, quick witted, hilarious, and truly ONE-OF-A-KIND. She was the sweetest soul and would cry every time she watched Sixteen Candles.

To order memorial trees or send flowers to the family in memory of Candice Rosenberg Populus, please visit our flower store.