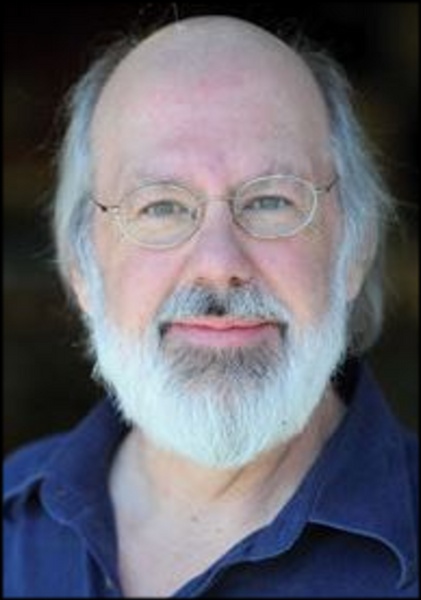 Stephen Ross Bynum was born July 8, 1958, in Stockton, Calif., grew up Tucson, Ariz., raised his family in Ketchum and Hailey, Idaho, and died Sept. 23, 2018, at St. Luke’s Magic Valley Medical Center. Steve’s face smiles eternally in the box office of the Magic Lantern Cinemas or behind the counter at Video West.

A pillar of his community, Steve was our resident expert in all things cinema, music, politics and literature. He gave his friendship and mentorship liberally, bestowing unconditional love and approval on the young and the old, and he was hopelessly devoted to his wife and partner of 42 years, Heidi, and children, Alice and Liam.

Steve was raised by three women: his grandmother Alice, mother, Babe, and sister, K.C. He spent many nights at Grandma’s house (he was her favorite), along with his seven uncles and aunts and many cousins, with his mom working two or three jobs at all times to provide for her daughter and son. He learned to read early, and used his voracious literacy to connect to worlds and cultures beyond his own: the underground, recorded music, comics and zines, masters of painting and film. His friends in junior high and high school, especially Ted and Deuce Miller, reflected his interests. He was chubby, balding, loving and jovial from the beginning, and he had an extraordinary voice—the thing Heidi first fell in love with in their senior year at Rincon High School.

He studied art at the University of Arizona, delivered The Arizona Daily Star, and was held up at gunpoint at the Circle K (the first of his nine lives). Not wanting to leave G.G. Alice until she died at 94, when Heidi came to Ketchum to visit Scotty, he packed up and followed, knowing next to nothing about the place. After a few months, he talked Cindy Hamlin into hiring him along with Doug Bergstrom, working closely with Rick Kessler at the Magic Lantern, where he connected to our community through cinema. He was preoccupied with entertainment, feeling it his duty to ensure that each of us was thoroughly amused and educated in his presence.

When Alice and Liam were born, Steve got to invent fatherhood, not having experienced it himself. For him, fatherhood was about nurturing the child’s innate creativity and loving heart. He read to his children every night off, continuing into their adulthoods. He plied them with instruments and art supplies, indulged every interest they ever expressed and took them seriously, respecting their opinions and engaging them in lively debate. He was endlessly proud of their accomplishments, and of them.

Steve’s own creative works boggle the mind. They included screenplays, cartoons and comic strips, portraits and music anthologies; he managed bands and produced albums under the name Analog Retentive, wrote reviews, published Pork Pie Magazine and That’s Cool, That’s Trash. He was an autodidact, enthusiast, collector, teacher. Though he hated capitalism, he was an excellent salesman, generous boss and terrific customer, from the Lantern to Video West to the libraries, Iconoclast, the Record Exchange, Atkinsons’, Irving’s, the post office and the bus. He knew your name, as you knew his.

He and Heidi believe in being there, smoothing the path, putting others’ needs first, that “no man is a failure who has friends.” He admired givers, kindness, poignant truths and beauty. He fell in love with Heidi for the near-perfect way she perceives others’ needs and always looks to the good. They understood each other, equally committed to the success of their family, and forged their marriage from the childhoods they both had come through, and they succeeded.

Steve turned 60 years old this July and celebrated his 31st wedding anniversary in May. He continued growing his entire life, including after a stroke in 2010, which tripped up his speech, but also taught him to be less reactive, more receptive and even more sentimental, acutely aware of the closeness of death. This last year, he was able to rest and enjoy his home with Vinnie, Shadow and Heidi. Not sick, just not working, he recorded many memories and watched the seasons change.

Steve died suddenly, days after developing acute idiopathic pancreatitis. He was surrounded by his adoring family, alert and loving to the last, as they sang, spoke and held each other.

All are invited to celebrate Steve’s life at Church of the Bigwood at 2 p.m. on Saturday, Oct. 20. Donation details to follow with the memorial announcement.

To order memorial trees or send flowers to the family in memory of Stephen Bynum, please visit our flower store.