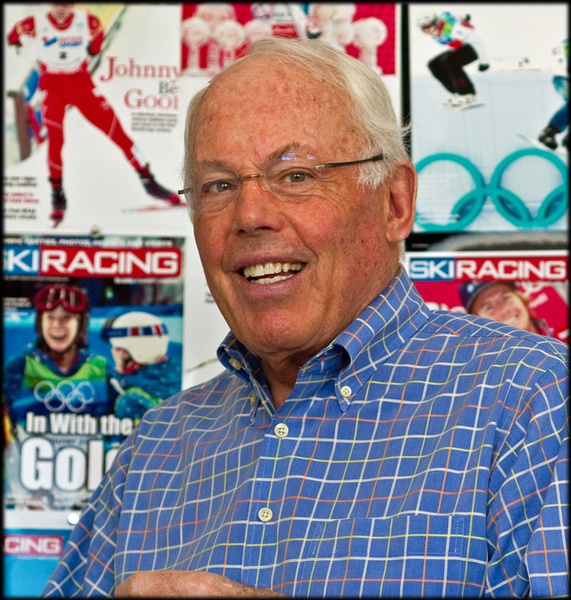 Gary Black Jr., longtime publisher and CEO of Ski Racing International, died peacefully in his home at age 75 Saturday (Feb.25) on a bluebird day in Sun Valley, Idaho, surrounded by his family and his dogs.

Black was born on August 2, 1941 to Catharine Bond Jackson and Gary Black Sr., in Baltimore, MD.

He grew up in Baltimore, attending the Calvert and Gilman schools. He graduated from the University of Pennsylvania where he was a proud member of St A's fraternity and served in the National Guard.

In keeping with family legacy, Gary began his professional career at an early age with the Baltimore Sun. He worked every facet of the newspaper that his grandfather, Van Lear Black, bought in 1915, under the tutelage of his father, Gary Sr., who was the Chairman of the Board of the A.S. Abell Company, which owned the paper, from 1956 to 1984. GB Jr., as he was called, began in the newsroom following the crime beat, then continued onto leadership roles in sales marketing. While at the paper, Black served on the board of the Abell Foundation which was established by his great uncle, Harry C. Black. He also served on the board of the Maryland Historical Society and the Bryn Mawr School. He left the paper in the mid-eighties to pursue his true passion.

A lifetime skier and avid outdoorsman, Black was on the National Ski Patrol at several resorts: Oregon Ridge, Ski Roundtop, Wisp, Squaw Valley and Portillo. He was also a member of Ski Club Arlberg for 40 years. He inherited his love for adventure and travel from his parents, playing out his passion across all corners of the globe. He was also active in animal conservation efforts in Kenya and Tanzinia, serving on the board of the African Wildlife Foundation.

Black purchased a small newspaper called Ski Racing Magazine in 1984. He relocated to Waitsfield, VT and began his career as the world’s premier voice of snowsport competition. Black's passion for the sport of alpine ski racing carried him through more than three decades and several iterations of the magazine, which now operates digitally as SkiRacing.com.

In 1995, Black moved to Sun Valley, ID where he continued to champion snowsport competition and became a voice with international implications when asked to join the International Ski Federation’s (FIS) on PR and Mass Media Committee as well as the Alpine World Cup Committee. He also served on the board of the Sun Valley Ski Education Foundation and was instrumental in the initiation of the Sun Valley Ski Academy.

He has received numerous awards for his achievements in journalism and contribution to sport. In 2008, the U.S. Ski and Snowboard Association honored Black with the Julius Blegen Award, it’s highest honor for service to the sport. He also received the USSA’s John Clair Award in 2003 for his support of the U.S. Ski Team and the USSA Russell Wilder Award for contribution to youth in 2005. During the recent FIS Alpine World Ski Championships in St. Moritz, he was recognized by the Association of International Ski Journalists (AIJS) with a lifetime achievement award. He will be recognized this April by the International Skiing History Association with a similar lifetime achievement honor.

At the time of his death, Black was the Chairman of the Board of the Abell Foundation, a role he assumed upon his father's passing in 1987, and was an active trustee of the U.S. Ski and Snowboard Foundation.

Black’s passion for the world he loved was infectious. He had an unforgettable laugh, a never-ending supply of stories to share, an occasional yodel, and a smile for everyone. He was happiest on the side of a race course cheering on athletes, making his own perfect ski turns, preparing his famous fondue dinners, mixing his Yuletide eggnog or squeezing limes for his margaritas, and walking with his dogs. He was a loving husband, tremendous father, inspirational leader and loyal friend. He will be missed by many.

He is survived by his wife, Heather Freeman Black, his three daughters, Amanda Rising Black, Serena Black Martin (both from his previous marriage to Amanda B. Savage) and Alexandra Kathleen Black, as well as three grandchildren, Alexander Byers Martin III, Adair Jackson Martin and Harrison Van Lear Black. He is also survived by a sister, Catharine Wilder Peterson.

In lieu of flowers, friends are asked to consider a donation in his honor to the Sun Valley Ski Education Foundation or the U.S. Ski and Snowboard Foundation.

A memorial tribute was held in Stowe, VT earlier this spring and a celebration of life will be at 3:00 pm, Friday, June 9, 2017 at the St. Thomas Episcopal Church, Sun Valley, ID.

To order memorial trees or send flowers to the family in memory of Gary Black Jr, please visit our flower store.