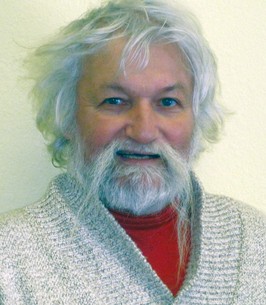 BALAZS SZABO - May 14, 1943 -May 24, 2019
We have lost our beloved Sun-bali.
Balazs (Bali) Szabo died at home in Hailey Idaho on May 24, 2019 of heart disease. He was born in Budapest, Hungary on May 14, 1943, at a time when the country was in turmoil. Knowing early on that as a free thinker and rebel he would not be able to survive, he escaped in early December 1956, without telling his mother his mother what he was doing. His father's brother lived in Connecticut, so Church World Service sent him over. It was not a happy match. After running away twice, he was briefly placed with the Studds family in Cohasset. Mass.. and then found a permanent home with Paul and Ann Henson in Orleans. Mass. He never returned
Hungary and never saw his mother again.
He graduated from Nauset Regional High School in 1962 and from Oberlin Collegc in 1967. Although he had a number of loves during his life, he never married or had any children.
Bali was a 20th century Renaissance man. Although English was not his first language, he mastered it and became a super Scrabble player, beating almost everyone consistently. He was brilliant and questioning, which got him into trouble from htime to time. He had an ear music, especially jazz, and could keep a beat well enough to be in the marching band in high school. Ile worked briefly as a studio musician and played percussion on some albums from the 1960s. As
a teenager, he tell in love with photography, and over the decades his photos were published in a variety of periodicals and books. He was a superb chef, his main occupation, working in kitchens and owning restaurants in Colorado, Massachusetts and New Hampshire. His early love of art led him to study the Old Masters in particular – and Pablo Picasso. He became a collector – of vinyl from the 1960s especially. Persian and Navajo rugs, Navajo pots, Mexican sculpture, paintings and prints.
He traseled extensively, to Nepal, the western part of the Silk Road, Ecuador, Peru, Israel, Algeria. Nova Scotia, and the Western part Of the U.S. where he hiked. rode horseback. whitewater rafted. and camped.
He read voraciously, never fiction, hut rather on every other topic imaginable. His numerous musings and observations cover the margins of every book he owned. and he also added any pertinent news clippings he came across. Ile was consummate daily writer, pondering life. what he reading, what he saw and experienced, where hc had traveled, whom he had spoken with. Many of you will remember his weekly articles in The Weekly Sun under the byline Habitat for Non-Humanity. He was also a gardener. taking over a vacant city lot near his apartment in Hailey and turning it into a xeriscape garden, There arc flowers under his apartment windows. and one of his cherished columbines bloomed as I was cleaning out his apartment. His study of religions led him to Buddhism and Karmé Chilling in Vermont, where he often cooked in exchange for meditation time. He learned how to make money in the stock marlet and even advised others.
Bali cared deeply about our environment and politics and family, about litc and humanity. He was kind, generous. witty. occasionally a bit full of hot air. As a Buddhist he would never kill even a mosquito. He had so many friends, people 'e loved and who loved him in return. And, he gave unconditionally to what he believed in.
Bali is survived by the Henson clan. H is cousins by temperament and choice rather than by blood, a sister, Nancy Henson Davis of Merrimack, N.H., and a niece, Joy Davis, and by his special friend, Christina Leone of Bourne, Mass.
We all have our special Bali stories, which I would like to try to collect to add his own about escaping Hungary.
Elizabeth S. M. Estey, one of the Henson clan cousins.
Services were under the care of Wood River Chapel in Hailey, Idaho. Friends may visit www.WoodRiverChapel to share memories and leave a condolence.
To order memorial trees or send flowers to the family in memory of Balazs Szabo, please visit our flower store.