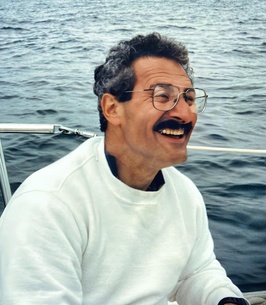 Rare is the man who is seen through the exact same lens by all, but to a person, those fortunate enough to know Ares Zarkos knew a man who was exceedingly kind, wise, and generous. He lived purposely, laughed often, and loved deeply.

A devoted husband to his wife of 67 years, Patricia Ann Zarkos, née Weber, Ares was a proud father to Carl, Chris, Jonathan, and Jenni. His family is where Ares' most admirable characteristics flourished: loyalty, strength of character, warmth, and profound affection for those he loved and cherished.

A first-generation American, Ares was born on March 30, 1932, in New Haven, Connecticut, to Savas and Despina (Pamboulos) Zarkos, née Zambarloukos, both of whom emigrated from Cyprus.

Ares co-captained the hockey team at West Haven High School. The Blue Devils won the state championship in 1949 with "Zark" skating wing on the first line. He was one of the Southeastern Connecticut Youth Hockey Program founders, which remains the only youth hockey program in New London County.

He was an insightful and avid fan of the New York Giants, Mets, and Rangers, following each team with enthusiasm, and was known to upset a table or two during games.

School and sports brought Ares and Pat together. Patti met Ares while cheering at Blue Devils hockey games, and the pair forged an enduring and unbreakable bond, marrying on September 25, 1954.

Ares obtained a bachelor's degree in business from Bryant College in Providence, Rhode Island, before being stationed by the Air Force in Tripoli, Libya, where Carl was born in 1956. Back home on the east coast, Christopher followed in 1962, Jonathan in 1968, and Jenni in 1969. The family settled in Waterford, Connecticut, not far from extended family, and their home was a happy hub for holidays and get-togethers with cousins, aunts, uncles, and grandparents. Their home was a haven for all, filled with laughter, love, and loyalty for family, friends, and faith.

Ares was vice-president and chief comptroller of several divisions at Crompton-Knowles. Even after retirement, he remained busy sharing his knowledge of finance with local businesses and organizations.

Lured to the west by skiing and new grandchildren, Ares and Pat (for you couldn't say one without the other), moved to Ketchum for good in 2005, building a home in West Ketchum. The pair was a familiar sight during their many long treks around town and could reliably be found supporting their grandkids at hockey, soccer, football games, recitals, and plays. As devoted Catholics, Our Lady of the Snows and the parish were central in their lives, and they were gratified to give many years of faithful service.

His avid mind and zeal for life led Ares to pursue skiing, sailing, cycling, tennis, mountain biking, gardening, and baking, which he readily taught to and shared with his children. He loved the mountains and skiing on Baldy. Riding chairlifts with him on a sunny day, his enthusiasm was contagious. Skiing brought him immense joy, and every day on the mountain was a day well spent.

His warmth extended to all, and he never knew a stranger. Ares appreciated each moment, large and small, and taught us that gratitude for each other and our lives are among the best attributes a person can possess.

A funeral mass is scheduled for Friday, February 25, 11 a.m., at Our Lady of the Snows Catholic Church. A reception will follow in the church's parish hall. The service will be available to view via livestream at https://www.svcatholic.org/. Private interment will be at Ketchum Cemetery.

In lieu of flowers, please consider a gift in Ares' honor to the Ketchum Sun Valley Volunteer Firefighters Association at P.O. Box 1262, Ketchum, Idaho, 83340, or https://www.ksvva.org/.
To order memorial trees or send flowers to the family in memory of Ares Sam Zarkos, please visit our flower store.

Time of service to be announced