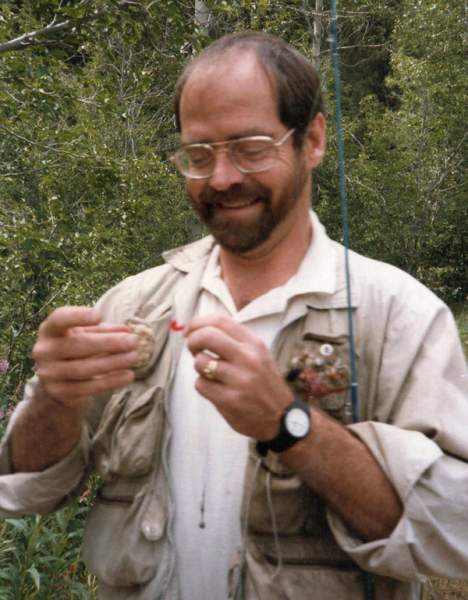 DAVID HENRY ALFS passed peacefully on September 24, 2016. He came to Sun Valley in 1970 to work with his brother Dick Alfs in his fly shop. He was a free spirit and lived by the mantra “You are a spirit riding a horse named body." He loved the mountains and most of all his motorcycles and his daughter Ashley Elizabeth Alfs and son Richard Coe.
In the 70s, he rode the mountains every night on his dirt bike with the boys from Scott USA and Hannah Racing Products. He was an avid remote control model airplane builder and involved in the early years of finding locations for runways. He worked on the mountain grooming snow, plucking ducks for his brother Dick and then self taught himself photography creating Alfs and Associates where he did work for Scott USA and other advertising projects including the first and award winning brochure for Mackay Bar. He then specialized in aqua and agriculture producing brochures for Rangen, trout fish hatcheries in Hagerman, and Idaho Fish and Game. Best known for his love of Honda Gold Wings, he traveled across the country back to St. Louis to visit family, always stopping at small cafes to talk with the locals. He was a member of the old Ketchum Drug morning coffee group.
He was born to Larry and Margaret (Frisch) Alfs in St. Louis on January 23, 1943, and married Donna Starodoj Alfs here in 1979. He leaves behind his daughter Ashley with Donna Alfs, a son Richard Coe (Joyce) of Michigan, three sisters Nancy Holley, Susie Hahn and Nancy Hanlon, seven nieces Sooz Alfs, Patty, Karen and Susan (Armistead, Jay), Holley, Phyllis (Ravensberg) and Molly (Bosch) Hanlon,and Amy (Leaky) Hahn, two nephews Rudy and Andy, two local great nieces Lacie Figgat, D.D. McCarthy and one great nephew Christopher McCarthy. He was preceded in death by his mother and father, brother Richard (Dick) and sister in law Bobbie, brother Larry (Bud), step nephews Billy Wayne and Ed Alfs and niece Valerie McCarthy. His passing leaves a big hole in our hearts.
In lieu of flowers or donations please send condolences to Donna and Ashley Alfs, P.O.Box 850, Ketchum, ID 83340. A public viewing will be held at the Wood River Chapel on Saturday, October 1, 2016 between 4-6 PM, with services scheduled for a later date.
To order memorial trees or send flowers to the family in memory of David Alfs, please visit our flower store.